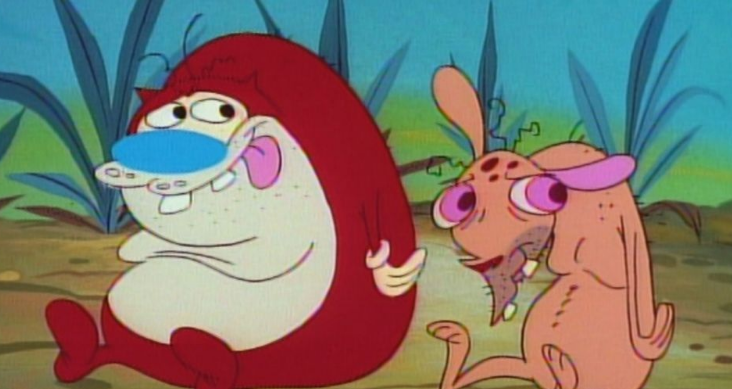 1. IT DEBUTED THE SAME DAY AS RUGRATS AND DOUG.

August 11, 1991 wasn’t just the debut of The Ren & Stimpy Show, it was also the debut of the first-ever Nicktoons lineup, which also included Rugrats and Doug. Together, these three shows helped form the foundation of the network’s next decade of animation, which later included hit shows like Rocko’s Modern Life, Angry Beavers, and SpongeBob SquarePants.

2. STIMPY’S CHARACTER DESIGN WAS INSPIRED BY A TWEETY BIRD CARTOON.

Stimpy certainly doesn’t look like any cat in the real world, but creator John Kricfalusi did have a source of inspiration when designing the character. According to the “Ren & Stimpy: In the Beginning” featurette from the show’s first DVD set, Kricfalusi says Stimpson J. Cat’s signature look—mainly his bulbous blue nose—came, in part, from a Tweety Bird cartoon called “A Gruesome Twosome.” The short, directed by the legendary Bob Clampett, features two cats, one of whom sports an obscenely large nose. The cat in the cartoon was actually modeled after entertainer Jimmy Durante, so there’s actually a little classic Hollywood sitting on Stimpy’s face.

3. JOHN KRICFALUSI GOT THE IDEA FOR REN AFTER SEEING A CHIHUAHUA IN A SWEATER.

In that same featurette, Kricfalusi revealed that the idea for Ren came to him after seeing an Elliott Erwitt photograph of a Chihuahua in a sweater. “It’s a very funny picture,” Kricfalusi said, “because here’s a psychotic looking monster in a cute sweater.” That same ferociousness coming from an unlikely animal informed the character of Ren from day one.

4. REN AND STIMPY’S VOICES BOTH CAME FROM HOLLYWOOD ICONS.

If you close your eyes and listen to Ren and Stimpy have one of their infamous arguments, you’ll hear the DNA of two Hollywood legends: iconic character actor Peter Lorre and The Three Stooges staple Larry Fine. Kricfalusi’s idea to model his take on Ren after Lorre’s signature squirmy, near-psychotic voice was there from the start, but it wasn’t until Billy West—best known as the voice of Fry from Futurama—came along that Stimpy’s character began to take shape.

After experimenting with different takes for Stimpy, Kricfalusi offhandedly suggested that West do his Larry Fine impression for the character. The offbeat suggestion worked, and when reflecting on West’s portrayal of Stimpy, Kricfalusi said in the featurette, “It was real weird, because here’s this youthful type of character. He seems like a little kid, right? But he’s got this full-grown Jewish man’s voice. I don’t know why it worked, but it sounded hilarious that he had that personality with a man’s voice.”

5. YOU’LL GET A LESSON IN CLASSICAL MUSIC IN EVERY EPISODE.

Ever since the early Merrie Melodies and Looney Tunes shorts, classical music and animation have made for a perfect match. Ren & Stimpy continued this tradition by using classic pieces by 18th-, 19th-, and 20th-century composers like Beethoven, Tchaikovsky, Charles Gounod, Camille Saint-Saëns, Raymond Scott, and a host of others. Whether they’re used to drive the action, or played underneath to establish atmosphere, every episode is full of renowned works from history’s great composers.

6. NICKELODEON HAD TO BAN AN EPISODE FOR VIOLENT CONTENT.

Ren & Stimpy was never going to be a traditional Nickelodeon series, and over the years the show’s production team crossed swords with Standards and Practices, parent groups, and the network itself over the nature of its content. One episode in particular was so outlandish for the network that it was shelved for years. Titled “Man’s Best Friend,” it featured a scene where Ren beats a character named George Liquor half to death with a canoe oar. The network refused to air the episode on Nickelodeon, and it wouldn’t appear until years later when the show was rebooted as Ren & Stimpy ‘Adult Party Cartoon’ on Spike TV.

7. KRICFALUSI WAS FIRED FROM THE SHOW DURING THE SECOND SEASON.

After the “Man’s Best Friend” controversy, Kricfalusi was fired from the series, along with most of the team at his production company, Spümcø. The network shifted the series over to its own studio, Games Animation, and handed the reins of the show over to Bob Camp, who attempted to keep the series' flavor intact in a way that would keep the network and sponsors happy. “In the long run, this will be a good thing for everyone,” Camp said. “John is like a not-ready-for-prime-time player. The idea of him doing children’s programming—it was good children’s programming, great stuff, but he was not in his element.”

Despite Camp’s efforts, fans and critics saw his era of Ren & Stimpy as a decided step down from the show’s early days.

8. KRICFALUSI AND BILLY WEST HAD AN AWKWARD REUNION ON THE HOWARD STERN SHOW.

After Kricfalusi was fired from Ren & Stimpy, he was under the impression that Billy West would join him in a show of solidarity—in fact, Kricfalusi says West told him he was leaving alongside him. Well, that didn’t quite work out, as West would not only stay on the show, but he would also take over the voice duties of Ren in Kricfalusi’s absence.

The two were unceremoniously reunited on The Howard Stern Show in 1995, where the shock jock instigated the duo over their split a few years earlier—even getting an assistant to claim West’s portrayal of Ren couldn’t match up with Kricfalusi’s. It’s a memorable segment in a car crash sort of way, and it wasn’t long after this painfully awkward interview that West—who was a regular on Stern—would leave the show.

9. WHEN REN & STIMPY RETURNED, WEST WAS NOWHERE TO BE FOUND.

Ren & Stimpy’s original run on Nickelodeon ended in 1995, but that wasn’t the last audiences saw of the vulgar cat and dog duo. In 2003, Spike TV—which is owned by Viacom along with Nickelodeon—brought Kricfalusi back for Ren & Stimpy ‘Adult Party Cartoon,' which was an attempt to make the show raunchy in a way Nickelodeon never would have allowed.

However, the revival wasn’t enough to persuade West to step back into the role of Stimpy, which led to Kricfalusi assuming the voices of both main characters. West spoke about his reasons for not returning, saying, “It would have damaged my career. It was one of the worst things I ever saw. Kricfalusi called me, and I told him I wished him all the luck in the world but I wasn’t interested.” Adult Party Cartoon didn’t even last two months on the network.

10. REN & STIMPY‘S SUCCESS OPENED THE DOOR TO OTHER CARTOONS.

Despite the behind-the-scenes drama, Ren & Stimpy still garnered huge ratings and merchandising opportunities for Nickelodeon during the 1990s. Obviously a sea of other twisted, adult-oriented cartoons soon followed, most prominently Beavis and Butt-head. Even creator Mike Judge credits Ren & Stimpy with Beavis and Butt-head getting the go-ahead at MTV: “Ren & Stimpy played on MTV for a while and was a big success,” Judge explained. “They used that as a justification to pay for this.”

SpongeBob SquarePants also owes a debt to Ren & Stimpy, especially when it comes to the series’ distinct animation style. Animator Vincent Waller, who worked on both shows, said of the shared flavor of both series, “Working on Ren & Stimpy and SpongeBob was very similar. They’re both storyboard-driven shows, which means they give us an outline from a premise after the premise has been approved. We take the outline and expand on it, writing the dialogue and gags. That was very familiar.”