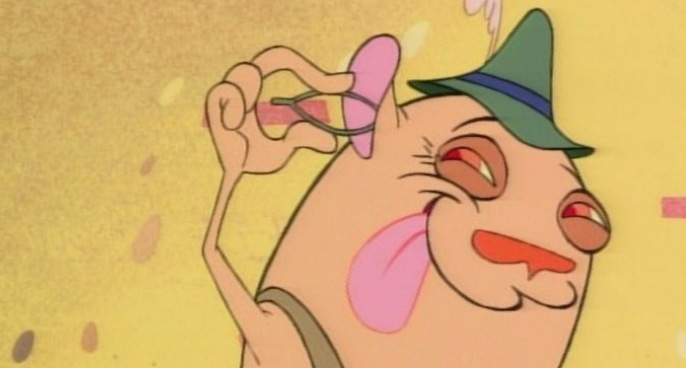 Let’s take a look at some things you might not know about the animation phenomenon.

1.A Good Few Scenes Were Cut

The show isn’t at all a stranger to scenes that probably shouldn’t have made it past the censors, but the issue is that sometimes they didn’t. Aside from the fact that the show frequently hinted at Ren and Stimpy being a couple in an abusive relationship, there were a couple of scenes in particular that went over the line to the point where they weren’t allowed to be in the show.

One example is Sven Hoek, in which Ren’s cousin comes over, Stimpy and Sven hide in a closet, and play a game Stimpy calls “sword swallower”.

This might absolutely ruin Ren And Stimpy for a lot of people who had previously been huge fans of the show. John Kricfalusi had long been rumored to be a guy with pretty unsavory habits, and one of them was unveiled in reporting from Buzzfeed when two women, Katie Rice and Robyn Byrd, came forward talking about their relationship with John.

Katie Rice and Robyn Byrd were both dating John K. while they were in high school, he was in his 30s. Not only that, but he flew them out to his house, and also got them jobs on the show. It was an open secret.

3.Nickelodeon Took Over All The Production

After getting rid of John K., Nickelodeon decided that they were going to be taking over the show.

They put together Games Animation, which later turned into Nickelodeon Animation Studio. Seeing what a big hit their show was, they decided to keep it going, and while they didn’t do anything that was massively risky after the initial run of the show, they continued with the same gross-out and dark humor that was pretty much the cornerstone of what Ren And Stimpy was known for.

4.One Specific Scene Got The John K. Fired

While there were a few issues with the making of the show in general, one of the biggest ones was that Spumco, the animation studio that made the show, founded by John K., would frequently submit episodes with scenes that Nickelodeon found way too violent, suggestive, or disturbing to make it to air.

One example of this was an episode called Man’s Best Friend, in which Ren mercilessly beats a man named George Liquor with an oar, completely brutalizing him and leaving him black, blue, and swollen.

5.It Was Frequently Submitted Late

There are a few reasons that Ren And Stimpy’s creator John K. got removed from the production of the show, but in truth, it might be more reasonable to consider that there’s no one specific reason that he got canned. Aside from Man’s Best Friend, John K. would frequently submit episodes past the deadline.

There are rumors that he would reanimate entire episodes that weren’t up to his standards, but that could very well just be an excuse to make him sound better for not submitting on time.

6.There’s A Reboot That Shouldn’t Exist

While it’s not exactly a reboot since one of the episodes that was already completed was aired first, (the infamous Man’s Best Friend) SpikeTV decided that they were going to start an animation block for their channel, featuring what else but Ren And Stimpy.

If one expected reruns, they’re wrong. Instead, Ren And Stimpy: Adult Party Cartoon was released, which featured an explicitly homosexual relationship, female nudity, graphic violence, and pretty much a whole mess of the worst things about the show.

7….And Another One On The Way

If you thought Adult Party Cartoon was unnecessary, as part of the ever-growing wave of nostalgia that sweeps across culture, we’re getting another Ren And Stimpy series, in addition to reboots of Beavis And Butthead and Daria that are going to be airing on Comedy Central.

Luckily, after all of the facts about John K. came to light, he’s not going to have anything to do with the project, although he’s been working as recently as 2015. The show, since it’s airing on a Viacom channel, is going to be done by Nickelodeon Animation Studio.

It’s not cheap to make and animate cartoons, and Ren And Stimpy was no exception. For the roughly two seasons of the show give or take a few episodes that were cut or replaced, Nickelodeon spent about 6 million dollars on making the show.

John K. and Spumco probably made a decent chunk of that, with a lot of the other money spent on marketing. Surprisingly enough, there wasn’t really very much merch for the show until well after the show started, since John K. had an aversion to “selling out”.

9.It Set The Template For Tons Of Other Cartoons

While the show might be mostly known for the show in itself and not so much what it’s done for animation, countless showrunners and directors have been immensely influenced by Ren And Stimpy, including people like Stephen Hillenburg.

The main thing that the show did that was so influential wasn’t just the more mature (and sometimes more immature) humor that is engaged in, but also the grotesque closeups of characters, and also the stark juxtaposition of bright colors that are pretty much standard now.

Since this article has spent a lot of time talking about how awful John K. is, it’s necessary that things are brightened up by discussing an absolute treasure in the voice-acting community. Billy West originally only functioned as the voice of Stimpy.

When John K. got kicked out, he requested that West followed him, but he refused. Instead, West started voicing Ren as well, in the ultimate “screw you” to K. Billy West is also known for voicing Fry, Professor Farnsworth, Zapp Brannigan, and Dr. Zoidberg from Futurama.