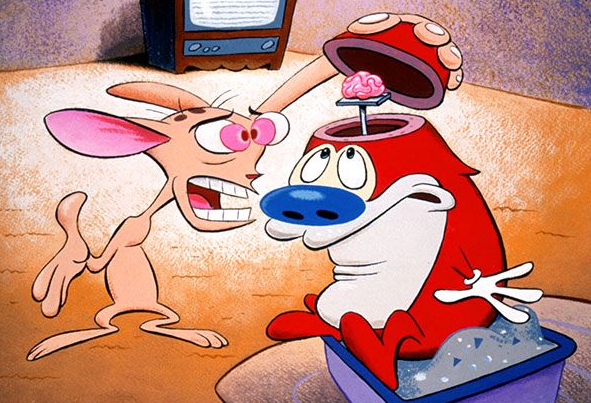 Let’s take a look at how Ren & Stimpy came to be.

As you’ll already know, Nickelodeon had some great shows that lasted for a long time, many of them still considered timeless classic by people who enjoy cartoons. While we may think of Ren & Stimpy as being out of the ordinary, something hidden away for being weird and vulgar, it actually premiered on the channel at the same time as Doug and Rugrats, two shows that Nickelodeon is still remembered for. Crazy to think that these childhood classics, ones that you’d probably still show to your kids now, debuted at the same time as something that pushed the boundaries as far as Ren & Stimpy did. Just goes to show that you can never truly know what is going to be a hit and what will get left behind…

When you think of Ren & Stimpy, the first thing that likely comes to mind is the unusual art style, an art style that set the show up as an outlier when it first premiered on Nickelodeon. There is something so animated and exciting to watch about the style, and yet it depicted some truly gruesome sights that stick to our minds even now. Well, believe it or not, but the character design for Stimpy came from an old Tweety Bird cartoon, an unsurprising fact considering John K’s enjoyment of classic cartoons. In the cartoon were two cats, both with bulbous noses, and John K was inspired by their character design, eventually turning that inspiration into Stimpy’s now signature look.

3.A Mixture Of The Gross And The Classics

While it certainly isn’t new to see animation use classical music, either to drive the atmosphere or set up the action, Ren & Stimpy’s vulgar content made the contrast particularly jarring. We don’t know if John K. knew this, as he was likely carrying on the tradition left behind by some of his animating heroes, but it adds a certain vibe to the show that continues to work to this day. It’s interesting to see how the things that were standard in more traditional forms of art can add something completely different when they’re used in the same medium but during a modern context. It’s that sort of stuff that continues to make art and creativity interesting to us.

4.Is This That Surprising?!

Yes, as anyone with even a passing understanding of the show already knows, Ren & Stimpy was a real problem for a lot of the people working higher up the Nickelodeon chain, as it went against the idea that they were a family friendly channel that caters to children and parents. Instead, they were showing off the work of a man who was uncompromised, who wanted to show how funny and crude animation really can be. In fact, one specific episode was shelved by Nickelodeon and wasn’t shown for years until John K. started up his new show Ren & Stimpy: Adult Party Cartoon for Spike.

5.Howard Stern Is A Bad Human Being

If you don’t know who Howard Stern is, then you’re a lucky person. Not only has he built an entire career out of being as vulgar as possible while still not managing to be funny, he tries to wind people up to a level that cannot be accepted. For example, he purposefully got John K. to appear on his show along with his old friend Billy West, who had decided to stay on to work with the original Ren & Stimpy show after John K. was forced to leave. As you can imagine, it was pretty awkward, especially seeing as Stern didn’t tell West that John K. was going to appear. Seriously, if this is the sort of thing you enjoy, we don’t like you.

6.Such A Shame That It Turned Out So Badly

Many fans were incredibly happy to find out that John K. was being brought back to create an entirely new cartoon centered around Ren & Stimpy, although they were sad that Billy West had declined to appear on the show as well in his original position. However, they didn’t have to wait to find out why it is that West had decided not to appear on the show, as many people panned the show once it made its way into people’s homes. West claims that the show was so bad when he first saw it that he felt it would affect his career forever. That is one of the most brutal insults you can say to an old friend if you ask us.

7.Every Cartoon Needs This Treatment!

What you’re currently looking at is what would happen if John K. was hired to animate The Simpsons. Yes, The Simpsons approached him and asked to do one of the infamous title cards for the show, one that used his trademark style to bring a truly unhinged version of America’s favorite family to people’s screens. Believe it or not, John K. has actually done this with a variety of people’s favorite cartoons, but we would rather that the man was handed some money to do his own form of animation, one that would allow his brain to shine for much longer than a minute or so. Seriously, somebody get this guy a job on their channel already!

8.He Had To Start Somewhere

While the original theme for Ren & Stimpy is much loved by fans, even they would have to admit that a theme written and performed by Kurt Cobain would’ve been much better. Believe it or not, this was nearly a reality, as a younger Cobain wrote and performed a song for Nickelodeon’s consideration before Nirvana hit it big and started playing around the world. Yes, that’s right, executives actually turned this version of the theme down, something that they probably regretted when Cobain became a household name not long afterward! Sadly, the Ren & Stimpy/Cobain collaboration has never made its way onto the internet so we’ll likely never be able to hear it.

9.You Think They’d Respect Those From Their Homeland!

Something that you probably already know is that John K. is of Canadian descent. One thing you may not know is that Ren & Stimpy was stopped from airing in 1993, when the channel that showed it decided to drop it from the air. This seems insane to us. You would think that everyone in Canada would want to support those that have gone on to achieve amazing things. Instead, they decided to drop the show, probably because it didn’t hit some sort of quota for being safe and easy television. We know it shouldn’t bother us that much, but it really does! We like Canada in general, but this has really put us off the place.

10.But Kids Love Those Things!

While Ren & Stimpy is considered so great by the world because it allows the characters to do whatever they want, as it’s animation, there was once a time when the show was planned to include live action elements, namely a host that would introduce various cartoons to the audience. When John K. pitched this idea, one of the cartoons he described was about a dog and a cat who live together, the idiotic cat getting on the dog’s nerves. The executives at Nickelodeon said they liked the idea of these two characters and that they wanted him to focus on them instead, which he agreed to do. We’ve found that kids love shows that combine the two, but we’re still not too sure why.

11.It’s Crazy How Voice Actors Come Up With This Stuff

When voice actors sit down to figure out how they want the characters their portraying to sound, you’d be surprised by some of the methods they use. One of these methods is to take the sounds and vocal ticks of people or characters that already exist, which is exactly what Billy West and John K. did when working on Ren & Stimpy. Ren’s voice was based off the neurotic and creepy voice of Peter Lorre, while Stimpy was almost entirely based off Larry Fine. The contrast between the two voices worked perfectly and helped represent the difference between the two contrasting personalities on the show. Amazing how much of a difference the voices on a cartoon can make.