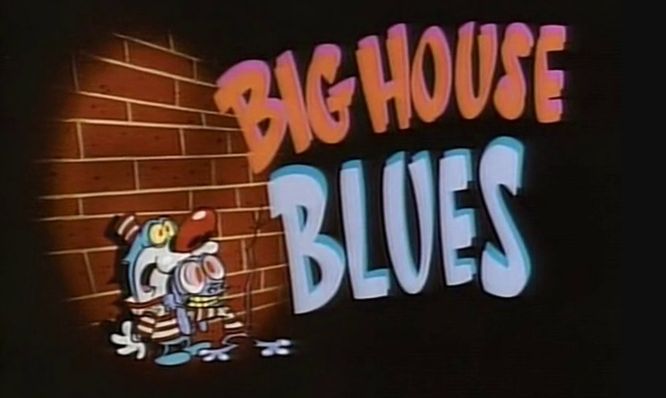 “Big House Blues” is the pilot episode of Nickelodeon’s series, The Ren & Stimpy Show. The theatrical uncut version was shown on August 10, 1990 at several film festivals as a way to promote the show and the Nickelodeon version was aired on September 15, 1991.

It is also the very first episode in the entire Ren & Stimpy franchise overall.

Ren and Stimpy try to survive the horrors of the Dog Pound.

Ren and Stimpy are two street animals, an asthma hound Chihuahua and a cat, whose hunger has caused them to band together in union, despite the disagree between their species. However, they are unable to find food and are left on the street starving, in poverty, and hapless. They get caught by the Dog Catcher, who allows them to have fun with the other animals. At a party, they meet Phil, who gets put to sleep by the dog catcher. Jasper tells Ren that Phil has been put to sleep and Ren, misunderstanding him, decides to take a nap himself.

The next morning, Ren dreams about kissing a woman, but wakes up to find out he’s kissed Stimpy. Ren exclaims that he’s been poisoned, and runs off to the toilet to wash himself of Stimpy’s germs. Then, Ren walks over to Jasper and asks him what happened to Phil. He told him again that the dog catcher put him to sleep. Ren says to wake him, but Jasper explains “You don’t wake up from the BIG sleep.” Ren panics and screams “THE BIG SLEEP!!!” three times, and starts whimpering. Stimpy asks Ren what the big sleep is. Ren calms down, then yells at him that he’s dead and they’ll be next if they don’t get out. Later, Stimpy vomits hairballs on Ren, which leads to him smacking Stimpy multiple times. The dog catcher comes for the duo, but a little girl mistakes Ren for a “cute little poodle”, due to the hairballs on him and wishes to adopt him. The dog catcher gives Ren to the girl and Ren is excited to leave alive. Then, realizing Stimpy is still left alone in the cell, Ren explains to the girl that he can’t go unless she takes Stimpy, too. The girl accepts, resulting in a happy Stimpy jumping on top of Ren. At their new home, they meet a woman who appears to be the the little girl’s mother. She gives Ren a sweater, and Stimpy a litterbox (his 1st material possession). Stimpy, overcome with joy, states that he can hardly wait to try it and hugs it close to his chest, only for Ren to come out of it, spitting out litter.

Below is a list of the production music used in the short.