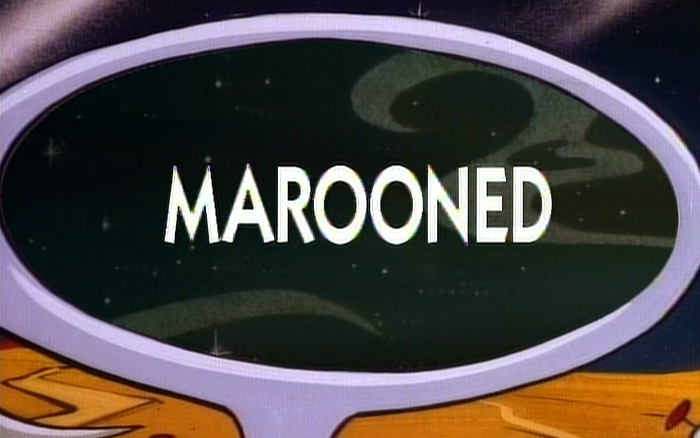 Commander Höek and Cadet Stimpy get stranded on an unknown planet, and their only hope for survival is Stimpy’s cadet guide.

Ren and Stimpy (As Commander Höek and Cadet Stimpy) find their ship rapidly descending on a mysterious planet. After the atmosphere having torn off all layers of their ship, they crash into the planet’s ground. After dusting themselves off, they try to contact Space Command, but to no avail. After a brief moment of despair, Stimpy finds his space cadet handbook, loaded with survival tips. The first tip is to scout around the planet’s area. While wandering, they observe the planet surreal aspects.

Fandom may earn an affiliate commission on sales made from links on this page.

After the scouting ( which took supposed weeks) Ren is hungry and inquires on what the book says about food. Stimpy reads that they have to preform certain tests before eating indigenous flora. Stimpy uses a tool to detect if the plants and animals are edible, but is revealed to know nothing of the technology. For his stupidity, he gets his nose pulled by an angry Ren. Ren is then shown to be waiting for Stimpy to prepare his dinner. Stimpy brings the food platter to reveal stinky space cabbage. Before Ren can eat it, The cabbage turns out to be a plant monster, and devours Ren’s head. He walks over to Stimpy, and slaps him repeatedly.

Ren and Stimpy set up a tent and rest in their sleeping bags. While dozing, something opens up the flap, letting in the light and waking Stimpy. After observing the source, he calls Ren to look at the moon. Ren angrily walks out of the tent and bumps his head on the moon which is right next to the tent. To keep him from being awaken again, Ren ties Stimpy in a straight jacket.

After sleeping yet again Ren hears someone knocking on the tent flap. Angrily heading to the flap, he opens it, and is love struck at the female Chihuahua outside. Stimpy wakes up to see the stranger, but he sees it as a bag of Gritty Kitty litter. He watches Ren caress the bag in bewilderment. It turns out they are both hallucinating, and the Chihuahua/litter bag is really a hideous tentacle which grabs them both. The Tentacle belongs to a brain alien which sucks them into his head. They fall to the creature’s bottom and see many aliens ready to devour them. Ren has an epiphany and asks Stimpy hurriedly what the handbook says to do in this situation. The book says they are doomed to which Ren goes bonkers at hearing this, and slaps his cadet with the book, while the aliens watch them.