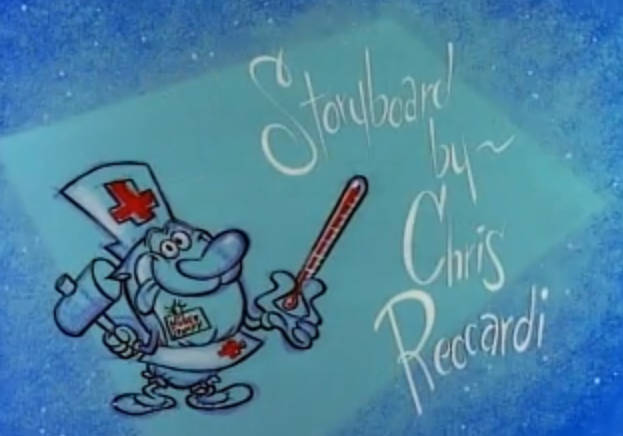 “Nurse Stimpy” is the fourth episode of The Ren & Stimpy Show. It originally aired as the second part of Episode 2 of Season 1 on August 25, 1991.

Ren gets sick, and Stimpy cares for him.

When Stimpy wakes up and finds out that Ren is sick, he promises to make him feel better as Nurse Stimpy. First of all, Stimpy takes a few tests on Ren like takes a blood pressure test, inflating and deflating Ren.

Next, Ren is supposed to take medicine. Stimpy brings a large spoon and gives him the medicine, which Ren dislikes and tells Stimpy, “That’s some icky-tasting stuff! What is that anyway?” Stimpy shows the label which reads “All purpose icky-tasting medicine”. Four months later, Ren is still sick and Stimpy notices something smelly and points to Ren, who hasn’t washed in weeks, so Stimpy gives him a sponge bath.

Stimpy tells Ren to take off his fur so he can get clean. However, Ren refuses. Stimpy then tries to take off Ren’s fur himself, which terrifies Ren and he says he’ll take it off himself. In the bathtub, Ren starts to appreciate what Stimpy is doing but says that he feels embarrassed by Stimpy washing him and Stimpy tells him no one can see him. However, Mr. Horse and others in the window witness the whole thing.

The next morning, Stimpy gives Ren breakfast in bed. Ren is very thankful for it, apologizing to Stimpy for always being mean. Stimpy gives him the newspaper and he sees an article saying “Ren Hoek takes bubbly sponge bath!! Hundreds witness soapy scenario!” which causes Ren to faint and enter into a total relapse. After several tries and days Ren still isn’t feeling better and Stimpy goes crazy about all the things he done for Ren, such as hooking him up to machines, bottle-feeding him, and staying with him all hours of the night. Then one morning, Ren wakes up cured, and Stimpy is now sick from trying to cure Ren. Ren is at first shocked but his shock turns to glee as he changes into Nurse Ren, determined to make Stimpy better. Stimpy looks into the camera, afraid.

After Ren says goodbye, we are introduced to Stimpy’s Magic Nose Goblins for the first time.