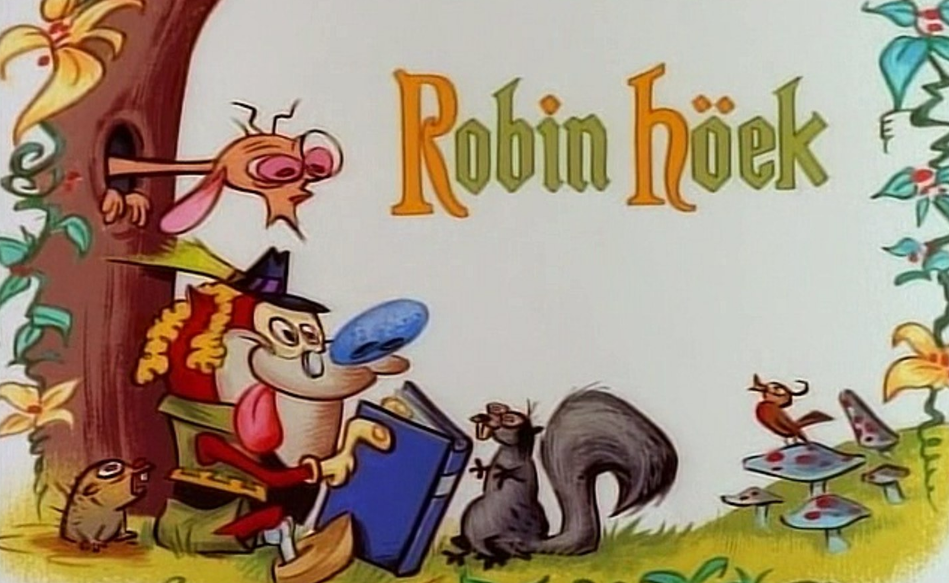 “Robin Höek” was the third episode of Season 1 of The Ren & Stimpy Show. It’s the first stand alone cartoon of Season 1.

Ren and Stimpy star in their own version of Robin Hood.

Ren and Stimpy are praying before getting ready for bed. Stimpy asks for his family to be watched over while Ren asks for a million dollars, a fridge with a padlock, and huge pectoral muscles. After their prayers they go to bed. In the middle of the night Stimpy wakes up Ren, to which he isn’t happy about, and asks him to read him a bedtime story. Ren, upset, tells him to read it himself. Stimpy then goes to get a storybook from his litterbox, and procedes to read the story of Robin Hoek. Robin Hoek (Ren) is the leader of his Merry Man (as Stimpy calls it) which includes Friar Chuck, Little Brain, Ransack the Elder, Elkhorn the Downtrodden, and Maid Moron, the most beloved of Robin’s merry men, who dwelt in a castle far across Logwood Forest. However, Maid Moron is held captive in the castle by the Sheriff of Dodge City (George Liquor). With the exception of the Sheriff and Robin, Stimpy portrays the Merry Man. After going through different trials to claim his bride, he is found by the evil sheriff. A fight ensues and he defeats the sheriff by “Thrusting a generous helping of giblet gravy onto he”. After the sheriff’s defeat he and Maid Moron were married, but Robin was unwilling to kiss the bride, then we switch back to the bedroom, where Ren is twisting and turning, and he screams himself awake. At first he is relieved that it was only a dream, but once he sees Stimpy dressed as Maid Moron, he faints and falls out of the bed.