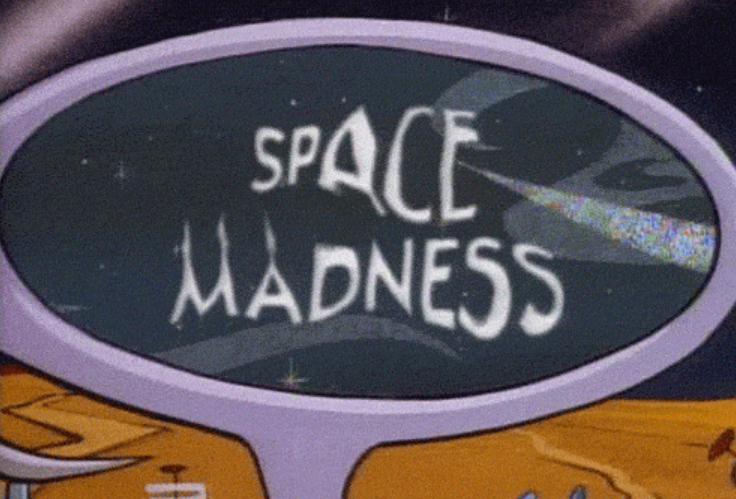 After Commander Höek and faithful Cadet Stimpy launch their 6-year rest period, the Commander bit by bit begins to lose his sanity…

Stimpy sits in front of the television, being prepared to watch his favorite live action drama, Commander Hoek and Cadet Stimpy, showing an annoyed Ren much of his merchandise from the show.

In the episode, Ren and Stimpy take the role of Commander Hoek, a space captain, and loyal Cadet Stimpy, his loyal second-in-command. Ren is writing his captain’s log as Stimpy is operating the ship. Ren says in his diary that he and Stimpy are on a 36-year mission to the Crab Nebula, having made the trip dozens of times. Ren tells the viewer that he heard how sometimes, people go insane from long trips and end up getting ‘space madness’ but scoffs at it. Ren tells Stimpy to commence a relaxation period and the two get on break, not having to be on duty for another six years. They sit in a break room staring at each other. When Stimpy asks Ren what he wants to do, he suggests they spend some quality time together. Ren’s patience quickly wears thin, and he lashes out at Stimpy simply because the latter keeps idly drumming his fingers on the table. Ren apologizes, as he thinks he might’ve gone crazy from being cooped up and Stimpy suggests that they eat a hot meal. Stimpy goes off to get the three course meal, which turns out to be three different flavors of meal-substitute paste. Ren bangs his head on the table, as Stimpy comforts him.

Stimpy then suggests that Ren take a bath to relieve his stress. To help him relax further, Stimpy turns off the gravity in the ship, causing Ren and the water in the bath to float several feet above the floor. Stimpy goes off to do his duty and Ren sits alone. He tries to concentrate on pleasant thoughts, thinking of actual food. The longer Ren soaks, the more manic his thoughts become, before announcing to no one in particular that he isn’t crazy, but rather mad. The bathwater and Ren float out of the bathroom and to the bridge. Ren begins talking to his soap, but Stimpy simply ignores him. Ren begins to eat the soap, thinking of it as a chocolate ice cream bar. Stimpy realizes that something is up when he overhears Ren telling the soap that “they like the same things” and Stimpy tries to stop him. However, Ren feels as though Stimpy is trying to take his ‘ice cream bar.’ He cries out, hysterically screaming that people have “always tried to take his ice cream bar since he was a child”. He screams and splashes the water everywhere, hiding in the corner. Ren tells Stimpy that if he comes closer, he’ll use a toothbrush. When Ren is forced to use it, he simply brushes his teeth in an exaggerated manner. The two fight, Ren ends up being pinned down, with Stimpy hugging him.

After the incident, Ren writes in his log that he’s tired, and that he’s sure that Stimpy tried to attack him. Ren begins thinking that he is indeed the sane one and that Stimpy has caught space madness, deciding to give his number two more duties to keep him from going any crazier. Some time later, Ren takes Stimpy to a red button in the center of a small room and tells Stimpy not to touch it, since it is the ‘History Eraser Button.’ He says that they don’t know what’d happen if they were to touch it and announces that they’ll never know, since Stimpy is going to guard it diligently. Ren walks away, still suffering from space madness. Stimpy begins to do his job, as the announcer asks the audience (and Stimpy) how long he can hold out and constantly tempts him to touch the button, doing everything short of rubbing his face on it. After the narrator’s pestering, Stimpy proclaims that he can’t hold out any longer and he pushes the button. All three characters disappear in a flash of white light. The episode then cuts to the Ren and Stimpy logo, with both of the main characters' images being erased.