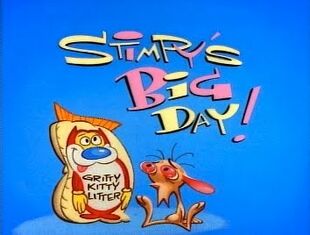 Stimpy wins a competition that takes him to the big time in Hollywood. Ren, left at home, begins to miss Stimpy more than he ever would have thought. Will Stimpy, rich and successful, remember Ren and return home?

Stimpy is watching television when Ren comes around and reminds him that he is too old for cartoons. Stimpy shoves him away and watches the Muddy Mudskipper show. He then comes across an ad for Gritty Kitty Litter and the announcer is about to announce a contest, telling all the cats to write a poem of 40 million words or less on why they like Gritty Kitty Litter and whoever writes the best poem wins $47 million, goat cheese, a twelve-hour record set of the top hits of the 1970s, and most importantly, a trip to Hollywood to guest star on the Muddy Mudskipper Show.

So Stimpy writes his poem right away and seals it in an envelope. Before he could mail it in, Ren tries to convince him that cartoon characters are not real, but puppets instead. Stimpy, now feeling irresolute, struggles to put the poem in the mailbox as Ren tries to convince him otherwise. Stimpy puts the envelope inside the mailbox anyway and begs for Ren’s forgiveness. But Ren instantly refuses.

Later, as the duo goes to bed, Ren wakes up and hesitantly attempts to forgive him until he hears the doorbell ringing. He hops out of bed to answer it and finds a couple of humans asking for Stimpy. Ren tells them that Stimpy is in the room and one of the humans tell him that he won $47 million. A soporific Ren turns to get Stimpy until he realizes the amount of cash, and tries to convince the two humans that he is the cat. Stimpy, however, wakes up and walks into the living room. One of the humans offers him the bag of money, telling him that his poem won first prize. Ren steals the money from Stimpy and tries to convince his friend that he helped him with the poem, but to no avail. Stimpy rides away with the two humans and Ren walks away irate. He then feels devastated and begins to sob.

At Hollywood, Stimpy meets Muddy Mudskipper and is about to start his act. He stars in a cereal ad, where Ren berates him for frittering away the cereal. So as he leaves for work, Stimpy pours all the cereal in a big bowl and gets the prize out of the box. The prize is a Muddy Mudskipper cereal caddy, and Stimpy says bye to the audience as the ad ends.