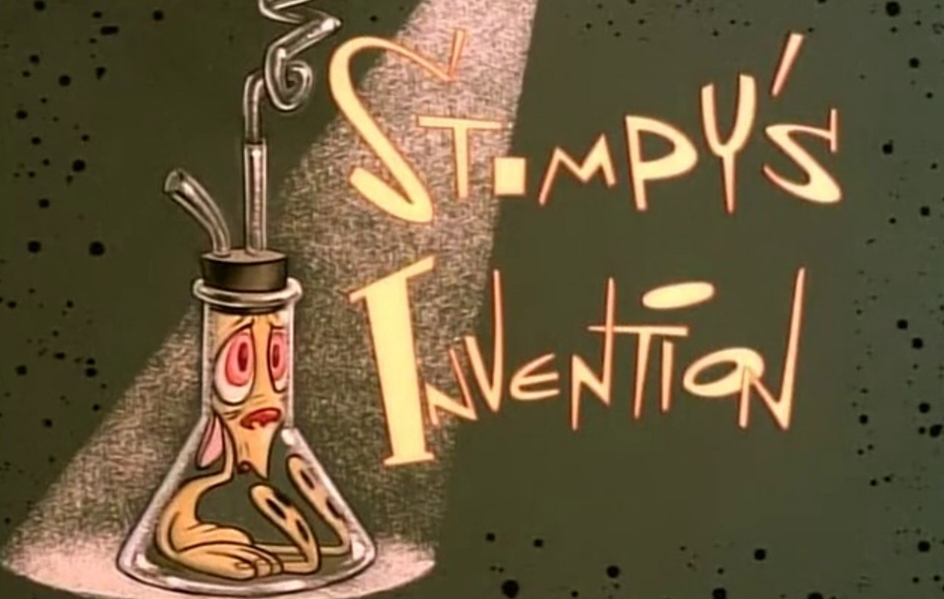 “Stimpy’s Invention” is the 12th episode of Season 1 from The Ren & Stimpy Show. It originally aired as the Season 1 finale on February 23, 1992.

Stimpy builds a device that changes Ren’s angry behavior altogether, but will it last?

Stimpy decides to be an inventor and ends up inventing various devices and gadgets. He has a reluctant Ren try out his Cheese-O-Phone, which allows people to talk to cheese, regardless of their foreign tongues. Next he invents a shaver that allows people to get a close shave without even being there, which leads to him shaving off most of Ren’s fur. Before Ren can strangle him, Stimpy presents him with a gift. The gift is Stimpy’s latest invention, Stay-Put Socks (socks that never fall down). Ren is at first delighted, but then discovers that the socks are filled with glue. Stimpy departs to get the Stay-Put hat and raincoat, and Ren attempts to go after but can’t get out of the socks. When Stimpy returns, he immediately notices that Ren is angry. Therefore, he decides to invent something that will make Ren happy all the time. After a long inventing session, he comes up with the Happy Helmet, a helmet to control Ren’s happiness. Ren is thrust into a state of completely forced happiness. He begins doing nice things for Stimpy, such as cleaning out his cat box and ironing his underwear. Then Stimpy brings home a record of his favorite song (“Happy, Happy, Joy Joy” by Stinky Whizzleteats). The two of them begin dancing to the record. In the middle of the dancing, Ren runs into the kitchen and finds a hammer in one of the drawers. He uses the hammer to smash the helmet and then storms back into the living room and begins strangling Stimpy. It is then that he realizes how much he loves being angry and thanks Stimpy for making him enraged. The episode ends with a shot of Ren grinning into the camera while his maniacal laugh plays in the background.

This episode has been considered one of the show’s most famous, and also one of the best episodes the show has ever made. It was praised for the song, Happy Happy, Joy Joy!, which was a popular hit from the series.