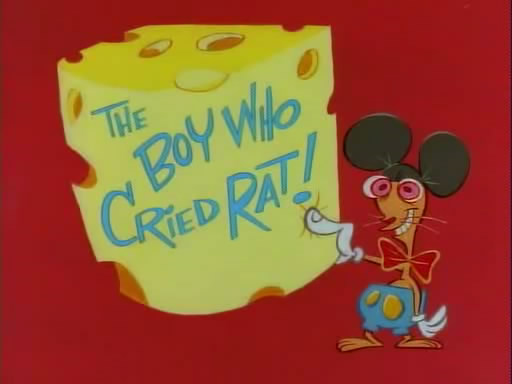 The Boy Who Cried Rat

“The Boy Who Cried Rat!” is an episode of The Ren & Stimpy Show. It originally aired as the second part of Episode 3 of Season 1.

To avoid starvation, Ren and Stimpy hatch a scam to gain some money.

When Ren and Stimpy are caught stealing out of garbage cans, they are chased out on the streets, and begin to starve. The pair then hatch a plan to get money and food: disguise Ren as a mouse and put him in a family’s home, and turn Stimpy into a neighborhood mouse catcher.

At first, the scam goes very well; the husband pays Stimpy five dollars in advance for him to catch Ren disguised as a mouse, so the duo play Tom and Jerry and Ren always hits Stimpy before he can get to him, or pretends to be tortured when no-one’s watching but when they’re listening. Eventually he lets Stimpy have the upper hand and allows him to catch him. It’s all going well and Ren and Stimpy are about to make a break for it, when the couple decide that Stimpy should eat Ren. Reluctantly, Stimpy shoves Ren in his mouth and chews him until he goes mad. Eventually, Ren tickles Stimpy’s tongue, making him spit him out, forcing Ren to give away the game that he is in fact a Chihuahua. But it turns out that they can’t get a refund as Stimpy tearfully admits that he ate the five dollars.

In the end, Mrs Pipe orders the duo to do a lot of chores, we see both Ren and Stimpy washing dishes (with plenty more chores to come).

Ren informs the viewers that it is five days until Yak Shaving Day, where one must leave shaving cream and a razor on their bathroom sink, so that at night, the Shaven Yak can come and give them presents: leftover shavings.