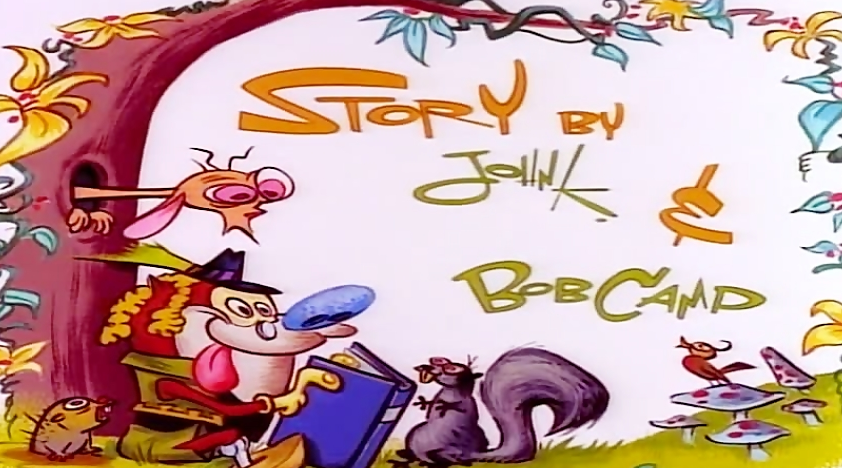 “Stimpy’s Storybook Land: The Littlest Giant” is an episode of The Ren & Stimpy Show that aired on September 19, 1991.

Ren dreams of Stimpy’s tale of an unusual giant, and his small friend.

The episode starts off with Ren and Stimpy praying on their bed. Stimpy asks for God to bless people, especially Ren who is “not strong”. Ren, meanwhile, wishes for a load of cash, a fridge with a padlock and large pectoral muscles. Just as Ren is about to go to sleep, Stimpy asks Ren to read a bedtime story. Basically, it’s more or less the same opening as Robin Hoek.

This time, the story is called “The Littlest Giant”. In Ren’s dream, the giant is Stimpy, who is bullied by bigger, mean cat giants for being shorter than the rest, and is the victim of Three Stooges-style abuse. Giant Stimpy has had enough with the abuse that he’s put up with, but his brothers in Huegevania are the only giant cats he’s ever known. As he sits on a rock in the middle of the forest, the giant Stimpy decides to run away, and so he writes a goodbye letter that reads, “My dearest friends, the bigger mean giants… I am running away, forever. Your punching bag: The Littlest Giant”. After a good two minutes of understandable but incessant sobbing, the giant leaves his country by walking through the ocean and his wandering takes him to the town of Thumbsville, a small town in the middle of a huge drought, where the farmer Wee Ren lives. Ren laments that his water-starved cow cannot produce milk, his pig fries in the sun, and his chickens “only lay silt”.

One day, just by coincidence, Ren wakes up to find Giant Stimpy, in tears, right by his well; the tears he produces fill up the well and rejuvenate his crops, allowing the cow to drink from it and produce milk again. A grateful Ren thanks Stimpy for this convenient contrivance and declares that he will do anything for him; an equally grateful Stimpy gets him to do a number of gross and bizarre tasks like shaving his tongue.

That evening, Ren wakes up to find giant Stimpy asleep by his house, and Stimpy concludes his story as them living “happily ever after”. The episode fades to black as Stimpy yells in pain.