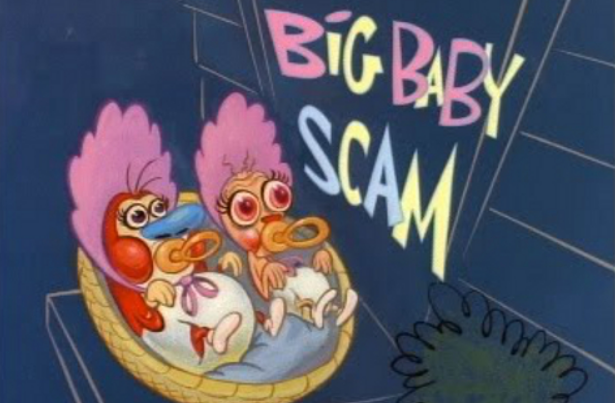 “Big Baby Scam” is an episode of the second season.

The episode opens with Ren and Stimpy in a tree eating bark. Ren spots two babies in the nearby house, and hatches a scam to take the babies’ place, as he feels that he and Stimpy will receive free food and shelter. Ren gives them fifty bucks to take “a permanent vacation.”

Mrs. Pipe checks on “the boys” first, Sean (Stimpy) and Eugene (Ren). Stimpy produces many full diapers while Ren produces none. Mr. Pipe comes home, and plays with the boys until “family bath time.” The family bath is interrupted by the doorbell, and Mr. Pipe hands the boys to Grandpa, who appears to be Old Man Hunger.

A policeman is at the front door with the real Sean and Eugene, who he found “at the track.” Ren and Stimpy confront the real babies for blowing their cover, and Ren demands his money back. He gets a series of gut punches instead.

Policeman: “We found these boys hanging out down at the track.”