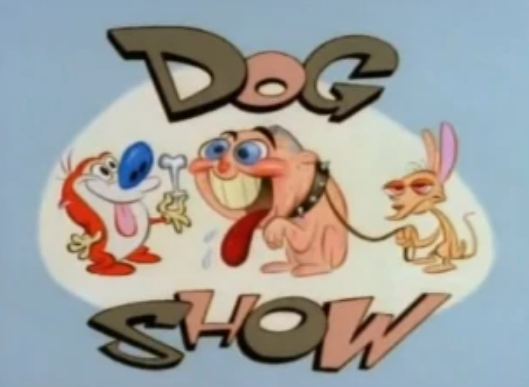 “Dog Show” is an episode of the second season.

At the all breed dog show, George Liquor shows off his “dogs”, Champy and Rex (Ren and Stimpy). He displays the traits of a show dog, showing Ren’s gums and teeth to represent dental hygiene, of which George gives massages to bring out the best look. After the massage he notices Ren’s tail, in disgust, and barbs it, leaving Ren tailless. He notes Ren’s smooth butt is essential for a showdog, bringing out Stimpy for another example. Stimpy mentions he isn’t a dog, but is ignored. He shows their fir, explaining how a daily waxing is the only way to bring out the shine. After he does this, It Stimpy’s top half bald, and Ren’s top half literally bare to the bone.

After announcing the pre-judging, George brings them to the judging room, along with other owners and breeds, confident that the duo will win. The judge (Mr. Horse), does tests on Mrs. Butloaves’ dog, Perrywinkle, determining it unfit, and throws it to a bulldog, which promptly eats it. The next man’s dog, which is a yapping poodle, is quickly determined by Mr. Horse to be unfit, and throws him to the bulldog. The poodle resists and begs for its life, which Mr. Horse shames upon, convincing the poodle to accept his doom. Next is Ren, who after looking him over, Mr. Horse considers him fit and sets him off to go over to final judging. Finally comes Stimpy who Mr. Horse hesitates as he has not seen the breed. He determines him unfit due a smooth butt. George blows up and shoves Stimpy in his face demanding a recall to which a startled and uncomfortable Mr. Horse allows him to move on to final judging.

At the finals, the judge looks over an Italian Greyhound, which highlights the competition that will be hard for Ren and Stimpy to top. The Hound gets a score of 9. Next Stimpy who is named as a Cornish Rex Hound, is called over for judging. After almost a perfect body form, he is disqualified due to an ingrown dewclaw. George is horrified and rips off his shirt, proceeding to spout insults at the judge. As Ren is called over for judging, George warns him he is his final hope to get his trophy. Ren refuses and dares George to do it himself, to which he angrily agrees. The judge is stunned at George’s pefect body form and declares him the winner of the Dog Show as a Royal American George Hound. As the audience carries him away with him holding his trophy, Ren and Stimpy hug each other with tears of joy for their master.