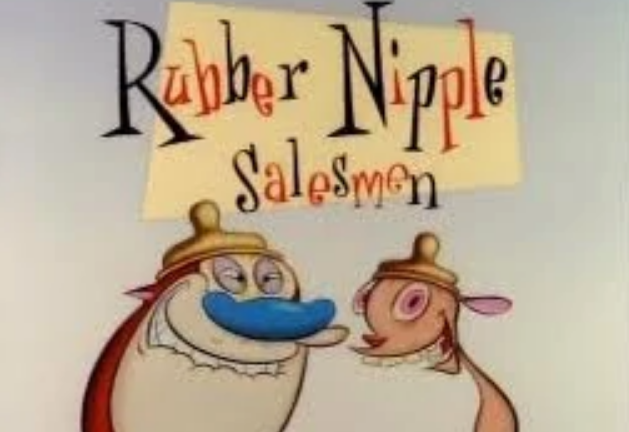 “Rubber Nipple Salesmen” is an episode from season 2.

Ren and Stimpy own a Rubber Nipple business and try to sell their product around their neighborhood… encountering some interesting people.

Ren and Stimpy are driving around their neighborhood in a Rubber Nipple truck. They stop at several houses, attempting to sell their product. The first house they drop by is owned by the Fire Chief (from “Fire Dogs”), who quickly smashes Ren, thinking he is a circus midget. He then apologizes and closes the door before they can ask him about the nipples. Stimpy says that he dreams that one day he will be as good a salesmen as him, to which Ren quickly slaps him.

They then go to Mr. Horse’s house, who suspects they are from the FBI. He threatens them saying, “Maybe I should make another mistake… maybe TWO more!” Ren, terrified, shows him a rubber nipple. Mr. Horse then starts laughing, and says that he has no use for them. He then asks, “But I’ll tell you what…do you have any rubber WALRUS PROTECTORS?” He pulls out a walrus, who begs them to call the police.

On the way to the next house, Stimpy begs Ren to let him talk at the next house, which he accepts. They arrive at a Mr. and Mrs. Pipe’s house (Mr. and Mrs. Pipe are the same from “The Boy Who Cried Rat!”), and they present the rubber nipples to them. They show them the MANY uses for their rubber nipples, such as holding nose trimmings, climbing on walls, and nose plugs. They buy the whole lot for a hefty sum of $5 and send Ren and Stimpy riding away on bulls.