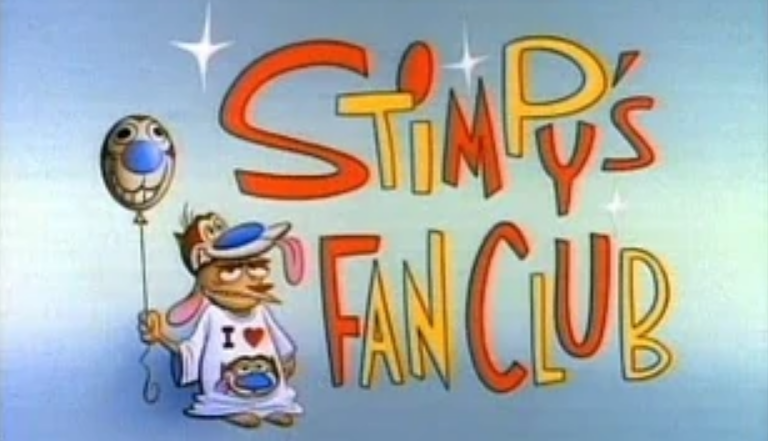 “Stimpy’s Fan Club” is the 16th episode of the second season. It is also a 22-minute episode, as opposed to eleven minutes.

When Stimpy receives the adoration of many fans, Ren becomes jealous, so Stimpy makes him the president of Stimpy’s fan club.

The episode begins with Ren and Stimpy waiting patiently for the mail. Piles of fan mail arrive, all of it for Stimpy and none of it for Ren. Ren becomes distraught, so Stimpy decides to make Ren the president of his fan club in order to cheer him up. As president, Ren’s job will be to read all of the fan mail and reply to it as Stimpy. At first, Ren likes the idea, but begins to abuse this privilege after a child insults him in her letter by asking why Stimpy always puts up with Ren and if he’s a mosquito, by writing passive aggressively to her that Stimpy isn’t real and that she’s stupid. Later, after a child admits to wetting the bed, Ren writes back an angry letter. Stimpy reads it and says that Ren should feel ashamed, as the both of them still wet the bed. Ren feels guilty and tries to get Stimpy to stab him with a rubber knife as punishment, but Stimpy decides that Ren has learned his lesson.

In a short, Ren and Stimpy go to their secret lair in the lower intestine of a sperm whale. The pair induct a teenaged girl named Susan Fout into their fan club after she brings them one million dollars in small change and says the oath. She is put into the honored seat for new club members. Ren tells the viewer that if they reveal what has been seen, they’ll rip out their tonsils, before Stimpy decides to return to the ‘secret cartoon.’

The episode continues, with Ren continuing to read fan mail, in which more fans see Stimpy in a positive light and see Ren in a negative light. However, he tries to uphold his promise to Stimpy and is forced to write back kind letters. With each letter, Ren begins to become more angered and jealous at Stimpy for the attention he is receiving.

That night, Ren goes completely insane from being jealous, not sleeping, feeling guilty for being nice to the children and seeing his hands as dirty for writing back to them. Ren views Stimpy as the cause of the issue and decides to murder him in his sleep by snapping his neck in order to stop it. Ren is about to do the deed after a long monologue, when his brain begins to sting and he fantasizes about being consumed by the fires of Hell.

The next morning, Ren dresses in a Stimpy machine and decides to take care of the fan mail problem. When the mailman shows up, he pretends that he’s Stimpy and tries to tell him to stop giving him (meaning give Stimpy) letters. However, the mailman announces that he only has one letter, and that it’s for Ren. Ren grabs the letter and gloats to Stimpy about it, reading it out loud, in which the writer says that he considers Ren his favorite person, hero and wishes to be more like him. He revels in the admiration and spitefully rubs it in Stimpy’s face. However, when he finishes reading it, he finds that Stimpy wrote him the letter. Bitterly ashamed and humiliated, Ren realizes the error of his way and how much of a jerk he was. He apologizes to Stimpy, and cries, Stimpy embracing him. Ren sees himself crying as pathetic. Stimpy tells him that it’s okay, as nobody will see him. However, the camera pans to a window, showing people (including Mr. Horse) watching them.

This episode is arguably one of the most famous of the series, as a moment from it has become a popular internet meme. The meme comes from Ren’s fantasy of being the president of the fan club, where he envisions being the President of the United States, having a heated argument on the Washington-Moscow Hotline (depicted with the inaccurate Red Phone). While on the phone, Ren suddenly shouts “WHAT DO YOU MEAN YOU DON’T AGREE WITH ME?! DO YOU KNOW WHO YOU’RE DEALING WITH,” before hitting a big red button (aptly labeled “The Button”) that destroys the region of Oceania (leaving behind a comically large crater) before laughing maniacally. The meme mainly consists of replacing Ren with various subjects of pop culture to varying degrees, replacing the target of destruction, and/or adding/changing voice clips.

The episode is also famous for the climactic scene in which Ren contemplates murdering Stimpy in his sleep, due to the realistic depiction of sanity slippage, the horrifying imagery, and the shot of Ren screaming and being consumed by the fires of Hell.