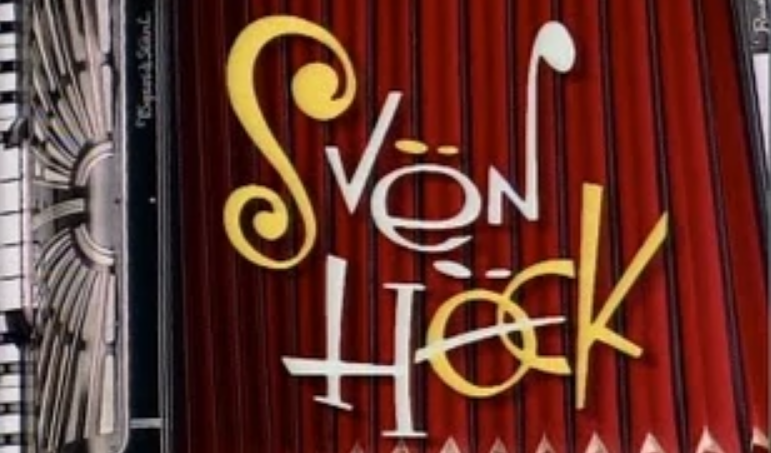 “Sven Hoek” (stylized “Svën Höek”) is an episode of the second season.

Ren’s cousin Sven visits, but he turns out to be just as stupid as Stimpy. The two bond over disgusting personal possessions, and Ren is horrified by the fact that they are wearing inflated rubber gloves on their heads (Stimpy claims that they are “Lodge Brothers” of the “Loyal Order of Stupids”). Much later, poor, exhausted Ren is going out to work, although it is not explicitly stated what his jobis, and the two are left in the house together, with Ren telling them to behave. After Ren comes home from work, he finds the house in shambles, with the majority of the living room being covered in cat litter. Ren shrugs it off, being relieved to be home, however, he sees that both Svenand Stimpy violated his material possessions, including putting bubble gum on his opera records, opening his collection of deadly/incurable diseases and painting his fossilized dinosaur droppings as if they are Easter Eggs. Ren angrily confronts the two in what seems to be one of his highest peaks of anger and threatenly tells them he is going to tear their lips off, gouge their eyes out, tear their arms out of their sockets, and hit them then laugh over them shortly after, in a very eerily calm voice. Before he can act on his threats however, he decides to go to the bathroom, demanding them to stay right where they are. He comes across a boardgameStimpyandSvenwere playing, called “Don’t Whiz on the Electric Fence” realizing they like the game, Ren precedes to urinate on it, while laughing maniacally only to end up electrocuted, causing the house to explode. The episode ends with the three being transported to hell where Satan asks Ren, “So, you whizzed on the electric fence, didn’t ya?” and they are all engulfed by flames as the jingle plays.

This episode is arguably one of the most censored episodes in the entire run of the series, with multiple different versions and deleted scenes (both before and after broadcasts).

The storyboard showing Ren’s “skin boiling threat.” * Every version of this episode is actually the Games Animation version of the episode. The original version made by Spumco wasn’t completed and was destroyed by Games Animation. The original version was supposed to have a different title card with Alfred Hitchcock music, and had the scene were Ren says “I’m gonna gouge your eyes out!” and the scene where Sven and Stimpy are playing in the litter box. Only a timecode and pencil cut of this original Spumco version exists. * This episode was banned from rotation by the early 2010’s, as it was not present on Amazon or Hulu and not rebroadcast on The Splat/NickSplat (despite clips often showing in promos) or on MTV in 2016, most likely due to the disturbing nature of the climax.