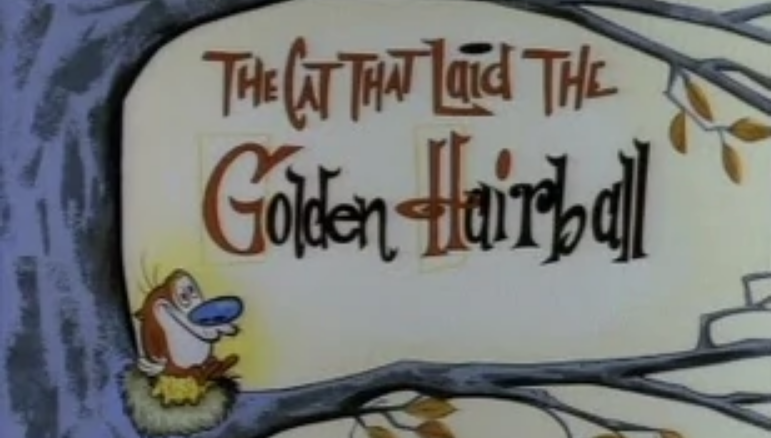 “The Cat That Laid the Golden Hairball” is the 15th episode of season 2.

In the morning, Ren goes to watch TV, but is disgusted by the amount of hairballs around the house, and he realizes it was Stimpy who caused the mess. However, he soon finds out from a TV news flash that hairballs are becoming more and more valuable, soon expected to be more valuable than gold. He soon sets up a factory for hairballs: Stimpy makes the hairballs (licking off his fur in the process) and hwarfs them out onto the conveyor belt; Ren checks them for quality and stamps them with a “Grade A” stamp, and his human nephew, Bubba, puts them into boxes, though once he puts a single hairball into his pocket.

However, Stimpy soon runs out of fur to lick off. Stimpy falls onto the conveyor belt, which causes Ren to violently stamp Stimpy’s butt. Ren lets him lick off his fur, but as Stimpy finished and goes back to work to hwarf out his hairballs onto the conveyor belt again, Stimpy has no luck, and says that Ren isn’t hairy enough. They also have him lick off Bubba’s hair, but again that does not work after Stimpy grows exhausted from trying to hwarf out his hairballs again and again. Ren forces Bubba to squeeze Stimpy, hoping for him to vomit out the hairballs, but instead Stimpy vomits out the his bones and organs. Then Bubba goes inside Stimpy’s body to investigate. He looks inside Stimpy’s body for hours, and finds Stimpy’s hairball gland. Bubba and Ren then find that the hairball gland is broken. They both begin to cry as Stimpy appears close to death and can never hwarf another hairball again, but soon the episode is over, and all begin to dance in celebration.