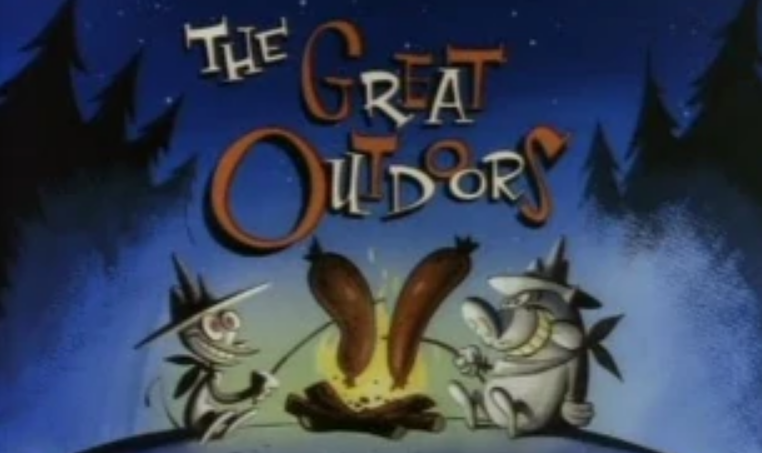 “The Great Outdoors” is the 14th episode of Season 2 of the show.

Camping at a lakeside wood, Ren and Stimpy go about making a pleasant camping trip. Faced with dehydrated food, mosquito squadrons, and eccentric skinny dippers, the great outdoors shows that it has its share of challenges for the pair.

Ren and Stimpy decide to spend all weekend in the woods, camping. While Stimpy is in tune with nature, Ren does not like it and wants Stimpy to be quiet. Once they get to the camp site, Ren tells Stimpy that he’s hungry and asks for food. Stimpy says that he brought dehydrated food pills. Ren finds it disgusting but Ren decides to have the red meat dinner pill. Stimpy says that Ren might not be able to stand it, so he offers him a cream spinach pill. Ren eats it, regardless, despite Stimpy saying that he must take the pill with water. Because of this, Ren’s body turns into a horse resembling Mr. Horse. Later, the pair go to the lake and Stimpy comes up with the idea for them to go skinny dipping by taking off their fur. Stimpy goes into the water and after pleading with Ren, Ren goes in. However, Old Man Hunger (who in this episode functions as a park ranger) jumps into the water, as he loves skinny dipping. After he invites his mother, Mrs. Buttloaves, into the water, the pair leave.

Later, Stimpy goes off to pick berries, asking Ren to light the campfire. When Ren asks how, Stimpy says to rub two twigs together. Ren is confused and picks up two squirrels, confusing them for twigs. He tries to rub them together like sticks, but after he is unable to light the fire, he pulls out gasoline, deeming it a better way. He spills the entirety on the log and drops a match near it, causing it to combust and burn him alive. He runs throughout the woods, Old Man Hunger spotting him. Old Man Hunger helps Ren by stomping on him, as he loves skinny stomping. Old Man Hunger then tells the viewer that after stomping their campfire, they must douse the embers and stir the ashes with a stick, using the battered Ren for his example. Stimpy returns, finding a charred Ren, who punches him.

Later that night, the two lie on a log, under the stars. They both find the stars wonderful and Ren asks Stimpy if they could sleep under the stars, to which he agrees. That night, Ren is kept awake by the buzzing of mosquitoes, which makes him more frustrated. A mosquito begins to suck his blood, so Ren squishes it with his hand. This attracts more mosquitoes. The next morning, we find that the mosquitoes have feasted on Ren’s blood, to the point of him being covered in bumps. Ren gets thirsty, so he decides to go to the lake and get a glass of water. He starts to drink it, but Stimpy knocks it out of his hands, as according to Stimpy, beavers do their business in the water, and that if Ren were to drink it, he would become infected with beaver fever. Stimpy offers to give Ren some of his clean, unpolluted water, but after Ren drinks it, it is revealed that a beaver is in the water. This means that Ren has become infected with beaver fever, which makes him sick and transforms him into a beaver, making his ears fold into his head, develop buck teeth, and turn his pink tail into a beaver tail. Out of anger, Ren starts to beat Stimpy silly with his tail. Old Man Hunger, who has also been infected, sees this and joins in the fun, as he loves ‘skinny slapping.’