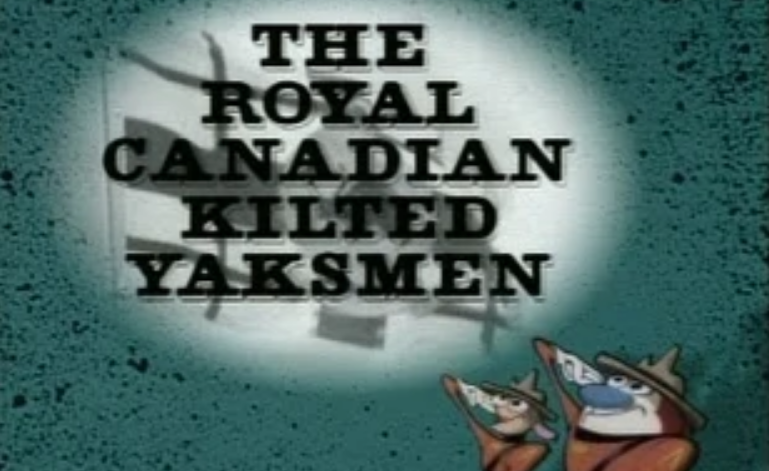 “The Royal Canadian Kilted Yaksmen” is the 18th and final episode of the second season.

Ren and Stimpy, who are bound to the order of the Royal Canadian Kilted Yaksman, must journey across the unbearable Canajun terrain to claim uncharted territory.

The episode begins with the lead of the Canadian Kilted Yaksmen, a group of men whose motto is “We Always Get Our Butts Kicked”, looking for men to take on a very important task. Stimpy bribes the leader with money (stolen from Ren), so the two of them are chosen to look for the great Barren Wasteland while the other men stay behind with a bunch of beautiful women. The two set off riding yaks and encounter several hardships.

First, the two have to cut firewood to burn for heat. Next, Ren gets sick and has to be treated by leeches. Then, Ren is forced to go to the bathroom in an outhouse without toilet paper. Next, the two of them are attacked by arrows, presumably shot at them by Indians. Then, the two of them are attacked by the world’s largest (smallest) primate. Now covered with bandages and riding their yaks in the rain, the two of them are struck by lightning. Then they venture into the Canadian jungle, where swarms of mosquitoes attack them. Ren selfishly snatches the canteen from Stimpy, only to discover too late that it’s filled with bees.

Ren soon becomes tired of the quest and wants to stop. Stimpy changes his mind by singing the royal anthem of the Kilted Yaksmen. However, the encouragement from the song soon wears off and the two become miserable and can only crawl across the ground, muttering the lyrics. Unfortunately, this drives one of the yaks mad and he demands that Stimpy shut up. Ren slaps the yak, bringing him back to his senses. Then all four of them sit down to think about how they can find food.

Finally, Ren comes up with an idea: They can eat dirt. Stimpy finds some dirt to eat, but Ren stops him, claiming that it’s “poison dirt”. Then he demonstrates the proper way to find dirt (by putting various food items on a shovel). One of the yaks claims that this “hunting for dirt is a bunch of baloney” to the other and stabs his shovel into the ground. He hits what is presumably a dirt spring. Stimpy prepares them food made out of dirt (fried dirt cakes and dirt on the cob). After their dirt feast, they fall asleep. They awaken the next morning and Ren plants a Canadian Kilted Yaksmen flag on a cliff. Stimpy and Ren and their yaks salute standing before the flag. The episode ends with the announcer semi-complimenting the two “heroes” as the camera shows a shot of Ren and Stimpy, still in their saluting pose, now skeletons standing under a highway.

The Royal Anthem of the Kilted Yaksmen

Our country reeks of trees

Our yaks are really large

And we have to clean up after them

And our saddle sores are the best

And searing sand blows up our skirts

And the buzzards, they soar overhead

And poisonous snakes will devour us whole

Our bones will bleach in the sun

And we will probably go to hell

And that is our great reward