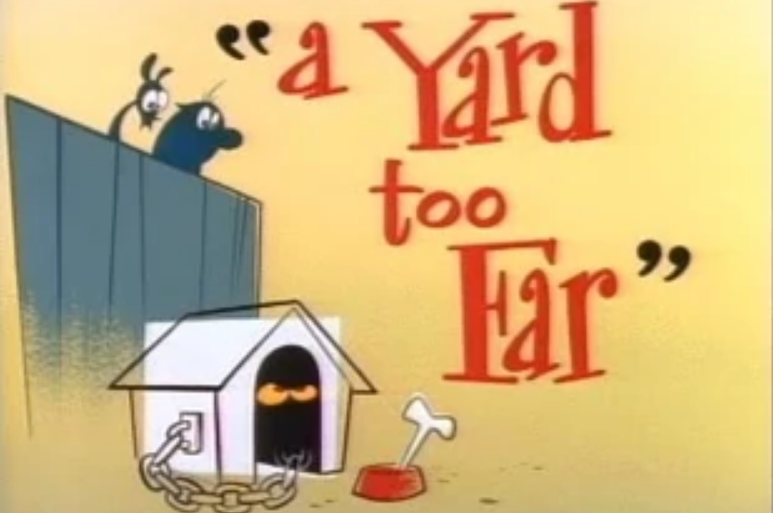 Ren and Stimpy attempt to steal some hog jowls.

Ren and Stimpy are starving when they discover an enchanting stench leading them to a plate of hog jowls, Ren’s favorite dish, sitting on a windowsill. However, Ren is reluctant to cross the house’s fence because he is convinced that there is a vicious dog guarding the yard. Stimpy peers over the fence to check and informs him that there is no dog. Unfortunately, upon rushing over the fence, Ren discovers that while Stimpy was right about there being no dog, there is a baboon, which proceeds to viciously maul Ren.

Later on, the duo is given an opening, with the baboon having gone to sleep. Therefore, Ren sends Stimpy’s fur under the fence to steal the jowls. While Stimpy’s fur sneaks past most of the house, it is unfortunately caught right before getting to the windowsill. Mistaken for a hog jowl, it is thrown to the baboon. Now skinless, Stimpy has no choice but to watch in horror as his fur gets ripped to shreds. Ren and Stimpy then disguise themselves as Mr. Pipe’s wife. The baboon starts to growl, but the disguised Ren is able to calm it. Just as Ren and Stimpy reach the windowsill, Mr. Pipe unexpectedly declares that it’s his wife’s turn to get mauled by the baboon, resulting in yet another failed plan.

Finally, Ren uses a puppet of a female baboon to distract the baboon in the yard, a trick he learned from a “Sylvester the Chicken” cartoon. Within moments, the baboon is instantly drawn to the puppet. Meanwhile, Stimpy sneaks past the fence off-screen. Everything Ren does only makes it more smitten, and as per baboon tradition, Ren is even gifted a box of live maggots. It gets to the point where Stimpy’s stealth is thrown off by an unexpected marriage between the baboon and the puppet. In the end, Stimpy successfully brings Ren his hog jowls at the cost of Ren having his other hand constantly used by the baboon; Ren doesn’t seem to mind too much, though, and the duo happily gnaws on the jowls.