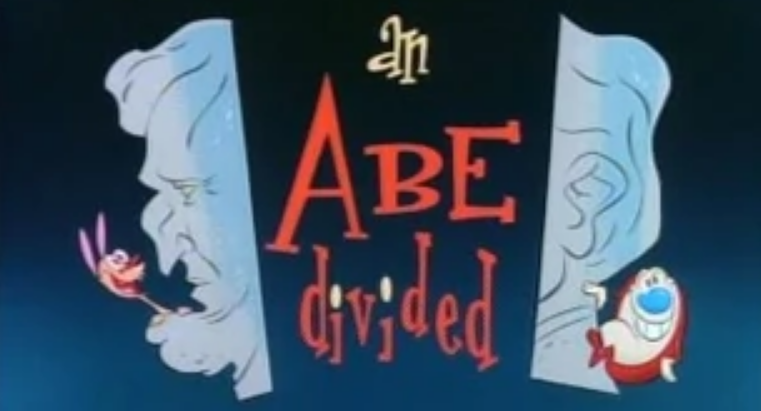 “An Abe Divided” is the sixth episode of the third season of The Ren & Stimpy Show, and aired on December 18, 1993.

Ren and Stimpy are assigned to guard the Lincoln Memorial. However, Ren breaks open the statue’s head after hearing about a rumored treasure inside, only to find caramel corn. Now they must repair the head before Sergeant Big Butt finds out.

The episode begins in Washington DC, where Ren and Stimpy find a rotten maggot-covered steak in the trash can. Ren, in amazement, discovers an ad stating “Security Men to guard President. $BIG MONEY$”.

The duo rush to the the Lincoln Memorial and ask Sergeant Big Butt, the supervisor, for a job for guarding the large memorial statue of the former president, Abraham Lincoln himself. However, Sergeant Big Butt threatens the two that they will get towels if they disgrace their country. Stimpy says that he likes towels, so the Sergeant snaps them a few times with wet towels.

The two are finally assigned to guard the Lincoln statue. Sergeant Big Butt demonstrates how to clean the statue by grabbing Ren and using him as a wash cloth to briefly wash the statue. Suddenly, Sergeant Big Butt looks up to the statue’s left shoulder to see three trouble-making pigeons that have pooped on the statue. Quickly, she grabs Stimpy and throws him to shoo the birds away. Then, she hands over the duo the buckets of water and brushes as she forces them to get to work. She tells them, “Don’t screw up,” and leaves.

Ren angrily begins washing the president. Stimpy, however, believes the Lincoln statue is Santa Claus. He hops up onto the statue’s lap and lists it the things he want for Christmas. But Ren throws a brush towards Stimpy’s head to snap him out of it and explains him that it is a memorial. This causes Stimpy, as usual, to cry, thinking Santa is dead which makes Ren feel annoyed and angry over his friend’s stupidity.

The next morning, as the duo welcome tourists to the Lincoln Memorial, Ren overhears an elderly man whisper to his grandson that there is treasure inside Lincoln’s head. Dreaming that he would become rich, Ren forces the tourists out of the memorial.

Then, Ren schemes to find the way on how he can get inside the statue’s head. He jumps up the nostril trying to get inside, and gets stuck in the process. Hearing Ren yell for Stimpy for help, the cat notices a coin slot machine on the left side of the statue’s chair, which reads “See the president pick his nose” for five cents. Luckily, Stimpy pulls out a single nickel from his pocket and drops it into a slot, hoping that he can get Ren out in no time. The statue’s left arm moves jerkily and uses one finger to pick Ren (as a booger) out of its nose. It sticks him under its chair where he discovers the collection of skeletons of dead security guards, who were wiped there as boogers as well.

Later, Ren and Stimpy use a two-man saw to cut the statue’s head off. During the process, Stimpy tells Ren that the president’s head is full of “beautiful, glorious, golden caramel corn”, but Ren disbelieves him, and the two continue sawing. Finally, Ren tells Stimpy to grab the head and warns him not drop it. But Stimpy lets the president’s head fall and shatter as he grabs Ren’s head instead.

Ren slaps away Stimpy, and jumps down to the pieces of the president’s head to look for a treasure, until, of course, he discovers that the head really is filled with caramel corn, just like Stimpy stated before.

As Stimpy gobbles up the corns, Ren laughs in embarrassment, but then stops and gawks at the headless president statue. Fearing that they will get in a lot trouble, Ren forces Stimpy to glue the head back together.

Stimpy tries twice to repair the head, first making Santa Claus and then Fidel Castro. Upon smashed the head the second time, the pieces of the statue’s head turn to dust.

The two try everything else to replace the head, from a penny, to a trophy of the elk, to a Moai head, to the head of the Statue of Liberty. Finally, they select to a huge dumpster, on which Ren uses a chalk to draw Lincoln’s face. “Needs hair,” says Stimpy, so Ren lights the trash in the dumpster on fire.

The two stand back to admire their work and congratulate each other when suddenly, a fat homeless man arises from under the dumpster, lifting it high. He jumps down in front of them and thanks them for the dumpster’s decorations, and walks off carrying the dumpster.

Their hopes are lost, Ren sobs, and prays to the spirit of “old honest Abe” for help. The ghost of Abraham Lincoln appears and gives Ren and Stimpy some kicks in the butt for punishment.

Later, Sergeant Big Butt allows all the tourists inside the memorial to the Lincoln statue, with Ren and Stimpy on top as the statute’s head replacement.