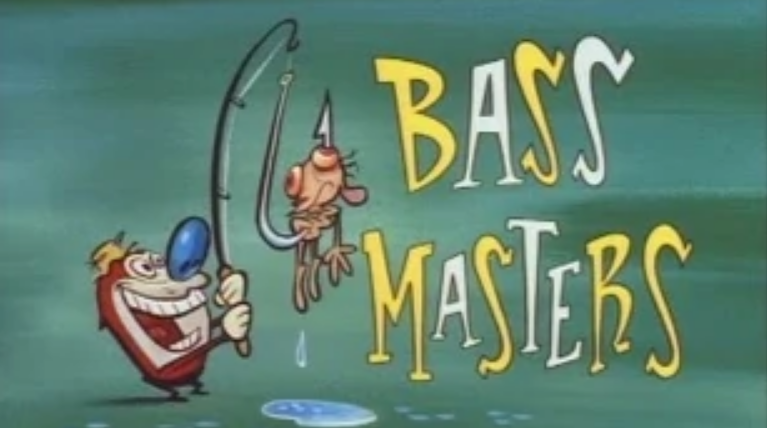 “Bass Masters” is the ninth episode of the third season of The Ren & Stimpy Show, and aired on February 19, 1994.

Ren hosts the television series when he teaches viewers to catch fish while on the hunt for “the foul-mouthed bass”, but Stimpy and escaped convict Wilbur Cobb are catching all the fish, when Ren himself does not get a single bite.

An announcer opens this episode with a narration like someone would hear on an outdoors show. The camera pans over a mountain that looks like a butt and a sickly squirrel before it zooms on Ren and Stimpy’s cabin. We pan through the halls, we see trophies labeled such names as “Bait Mastet”, “King Crank Baiter”, and “Grand Champion Basser”, followed by mounted fish (including Muddy Mudskipper) before the announcer introduces Ren, who is just finishing tying a fly to a hook for fly fishing, who is a tough, manly fly who aggressively accepts his fate. Ren prepares for their fishing trip by ordering Stimpy to get his lazy butt out of bed, who is shown to be sleeping with thousands of worms that they’ll use for bait. Ren explains the importance of sharing the burden of carrying the gear and tools, as he carries rods and tackle, Stimpy, dressed as ax captain, “rides” the worms to their small boat at the dock of the lake. Not to far away, we cut to the “Ping Ping Federal Prison” (a parody of Sing Sing Prison) where an escaped prisoner, revealed to be Wilbur Cobb (making this a pseudo sequel to “Stimpy’s Cartoon Show” and the second episode he appears in). The demented geezer spots Ren and Stimpy, just before they cast off, and halts them. He shows up in his prison uniform in cuffs and chains and jumps into the duo’s boat, using them as a way to escape his sentence by offering to be their “Indian Tour Guide” for two bucks and changing his name to “Eddy Lightningrod” on the spot. Stimpy is excited, an angry Ren breaks down and let’s Wilbur (Eddy) join them.

Later, Ren has placed naval mines into the water and dons a baseball bat in an attempt to catch fish, while Stimpy and Wilbur Cobb use only fishing poles. Ren acts like a stick in the mud and tells them that only his way is the best, while the others notice a group of eager fish begging to be caught nearby, but when they tell Ren to move there he yells at them he doesn’t care, and screams to the top of his lungs that any sound they make will “scare away the fish”. They remain in the same place all day, night, and into the next day, awkwardly and in fear of Ren. Stimpy lets out a small cough, causing Ren to flip out and telling Stimpy and Cobb to pull in their lines, because Stimpy’s cough scared all the fish away. Ren apologizes to the viewer for his friends “stupidity” as he decides to use a bucket of chum he prepared, scooping the bloody mess into the water. Some fish gather to suck it through straws. Stimpy and Wilbur are taking a break as Cobb rubs sun tan lotion on Stimpy’s back, who is eating “Kracky Jack” (Cracker Jack) until he finds the prize in the box, a “fish whistle”. Blowing it, a few bubbles escape as it makes a fish instantly leap out the water into the boat. Wilbur yells at the fish that he’ll scare away all the other fish, beating him mercilessly on the head with a bat. The dazed fish comes to, thanking Wilbur (because he needed to be hit, he was “flooping like a fish”) and happily joins he and Stimpy to eat Kracky Jack as Ren looks on jealously with his back turned to his chum, which has been stolen and eaten by two other fish.

Ren has set up a harpoon disguised with cat tail plants on the boat as he is about to demonstrate it. He claims fish are natural loiterers and has set up plastic fish decoys as they simply will not be able to resist “joining the crowd”. A fish who has the voice and mannerisms of “Hey, Its That Guy!” approaches Ren, and goes on to tell him that his people are catching onto old tricks with decoys, and if he really wants to catch fish, he needs a CobbCo “Pocket Weasel”, a complicated device looking like the “Pocket Fishing Rod”, guaranteed to catch “a jillion fish”. Convinced by the Salesman Fish’s offer, he places the device in his pocket, only for it to malfunction, shredding his pants and revealing his briefs. Stimpy says it looks fun and wants to try, however, he places the rod in his pocket and pulls out “a ten pound crappie” who he tells to go get a rubdown, who the Salesman Fish goes to join. Ren realizes he was wrong, Stimpy is the better, more natural fisherman and he desperately asks his buddy his secret. Stimpy replies that he “speaks fish”, he sticks his head underwater and begins making strange noises, getting the attention of two female fish getting their hair done and a group of shrimp having a barbecue (they use human fingers) who all rush to the boat, jumping in to form a conga line, like the Pied Piper to Stimpy, who still wishes them no harm and just wants them to party with he and Wilbur. Ren grows enraged, not accepting he is not the best, and that he just wants the fish as trophies, he accuses Stimpy of cheating by using fish language, telling him that he deserves all the fish he caught, pushing Stimpy out of the way and scooping them up for himself.

Just then, a loud, deep male voice screams at Ren. Turning heads of all the fish, he reveals himself to be a large, disgruntled bass wearing a bowling cap. Named Albert “the foul mouthed bass”, he approaches Ren, slapping the fish out of his hands after ordering him to drop them. He angrily confronts “Mister Bigshot Sportsman” Ren with his “dang fancy gear” and “mother trucking scientific equipment”. He tells Ren that it’s not fair that fishers get to have all the advantages, while fish have nothing, only “shattered nerves”, living in fear with no way to defend themselves and shows Ren his tongue, scarred and pierced with fish hooks and tells Ren that the problem is not understanding fish. Ren offers to learn, to which Albert begrudgingly agrees, not really thinking Ren deserves it. Albert tells Ren that in order to understand fish, he must think like one, he must get into the water and swim around so that Albert can catch Ren (obviously a trick) Ren agrees to this and strips naked, leaping into the water. He swims to a log and hides behind it, as Albert has changed into fishing clothes and is using a pole. Stimpy, Wilbur and all the fish watch with anticipation as Stimpy asks if “the “Ren” are bitin’ today”. Ren notices Albert’s bait and hook and shrieks with excitement as he spots the bait, chasing after it, building the tension on the surface with everyone as Albert can tell he is getting closer to catching Ren, who is now tucked his arms and legs like fins as Albert starts feeling more tugs at his pole. Soon, Ren bites the hook, causing his face to turn more like a fish, with an open mouth and bulging eyes. The freeze frame zooms out to see Ren now petrified as a trophy much like a taxidermied fish mounted on the wall. Still stuck into the fish shape he took, permanently, leaving him only able to blink in a unsettling way, now having the name “The Dumb Bass” (Dumb @$$) labeling him on his placard. He is revealed to be owned by a now much older, elderly Albert, in the distant future, who reveals the entire episode a story he was telling his grandson as a flashback, finally having gotten “even” with Ren. Albert’s grandson looks at his grandpa proudly as Ren continues to lie motionless mounted on their wall, save for the occasional blinking his eyes, hauntingly, forever.