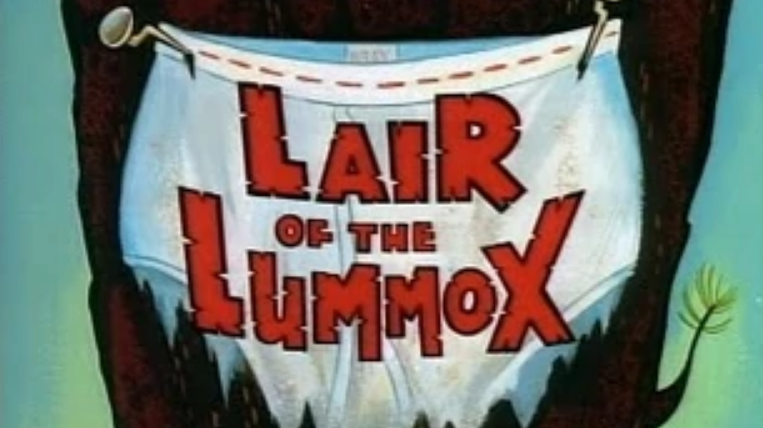 After a commercial for Cheesefist, Ren and Stimpy, once again nature show hosts, examine a certain humanoid species: The Lummox.

The episode begins with Ren and Stimpy as the hosts of Untamed World, welcoming the viewers to encounter the wildlife of the living animal known as the “Lummox” on the the island of Ignorania. As the duo explore the jungle, they spot the Lummox’s droppings (which are the collection of old foods, empty pizza boxes, etc.) littered on the ground. Finally after tracking the droppings, the two encounter the Lummox (which is actually an overweight messy, dimwitted and disgusting middle-aged human slob), this time the lummox they found is called the Booger Red Lummox. Satisfied with their discovery, Ren and Stimpy are about to take a closer look at the creature, but Ren accidentally snaps the twigs, causing a loud sound which is overheard by the Lummox, who looks on to investigate. The suspicious lummox stares at Ren and Stimpy, who quickly start to act like lummoxes, very similar to apes. So Ren and Stimpy watch and repeat what the Lummox does such as digging in his nose, scratching his buttocks (though Ren refuses), and most importantly messing up his food, like using a steak to comb his hair, and smearing mashed potatoes all over himself. Lastly, the friendly Lummox hands a plate of purple giblets to Stimpy, but Stimpy states him that he is a vegetarian, which makes the Lummox furious and threatens to attack Ren and Stimpy, as he pounding his pecs like a gorilla. Thinking fast, Ren hands to Stmpy a full bucket of lard and forces the cat to swallow the whole bucket of it, to prevent themselves from being attacked by a Lummox. After Stimpy successfully gulps the whole bucket of lard and as well as a bucket itself, the Lummox happily hugs the two saying that they are his “cousins”, and he takes them back to his log home where the three spend their time together, watching television during the night.

The next morning, Ren and Stimpy watch as another Lummox, which is called the Tree Lummox, is approaching from nowhere and rips off his briefs out of his pants and hangs them on a tree, hoping that he can attract his mate, while the Booger Red Lummox, did the same. The Lummox Cow (an ugly fat lady) appears and tries to pick which of male lummoxes’ briefs are soft enough to choose her mate, as the males watch. First she picks out Booger Red Lummox’s brief, but decides that it is not perfect enough to be her mate. Lastly she picks the Tree Lummox’s brief, and luckily, she finds it perfect enough to choose the Tree Lummox to be her mate. But the Booger Red Lummox became angry and jealous over his rival, and demands a battle, to see which one of them can have their mate. First the Tree Lummox does a bellywave, the Booger Red shoots an ink pen out of his bare tummy into the Tree Lummox’s face. Finally the two fat men belch at each other. First the Booger Red burps the ABCs, then the Tree Lummox burps by saying “Godzilla”, and finally the Booger Red Lummox fully burps by using the famous speech of Abraham Lincoln: “Fourscore and seven years ago our fathers brought forth on this continent, a new nation, conceived in Liberty, and dedicated to the proposition that all men are created equal”. The Tree Lummox loses while the Red Booger Lummox wins, and he deserves to have his mate, who models around the Booger Red into a suitcase and walks away. The episode ends back the the office where Stimpy blows raspberries through his sandwich to call out all the Lummoxes who bear hugs them.