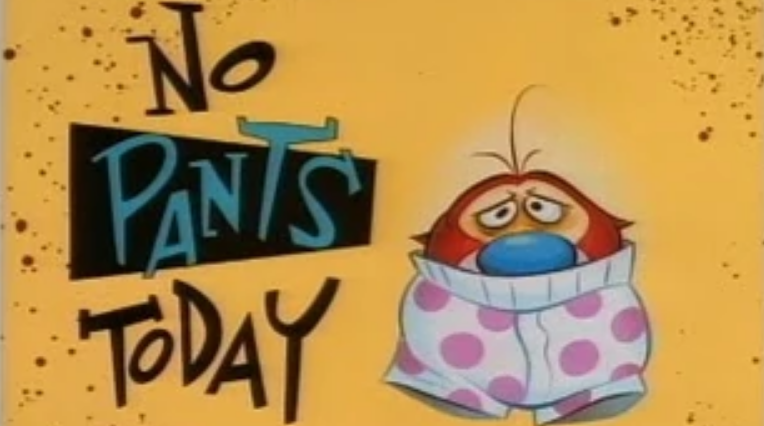 “No Pants Today” is the fourth episode of the third season of The Ren & Stimpy Show, and aired on November 26, 1993.

After taking a shower, Stimpy cannot find his pants and is sent outside without his will. On his quest for pants, he encounters Mr. and Mrs. Pipe, Victor the Bully and a pack of clothed wild animals.

One morning, Stimpy is taking a shower as he gets out to get dressed. As he goes to the dresser, he finds an empty drawer. In his shock, he wakes up Ren, who is still asleep. Stimpy brings to Ren’s attention that he doesn’t have any pants,, to which Ren tells him he doesn’t need to wear them since he is a cat. However, Stimpy still feels that this is wrong, and he asks Ren’s advice. Fed up with Stimpy’s stupidity, Ren whips Stimpy with his towel, and proceeds to kick him out of the house, telling him that the day is too nice be just be “stoo-peed” indoors.

Freaking out, Stimpy immediately sees a saving grace-a clothesline with Mrs. Pipe hanging she and Mr. Pipe’s clothes to dry. He tugs her apron and asks her for a pair of Mr. Pipe’s underwear, but she shrieks in horror when she sees “the naked cat” on her property, running inside to go tell her husband to get rid of him. Mr.Pipe comes outside, telling Stimpy what a “heathen” he is, squirting him full force with their hose, sending him running for cover into a tree. His safety does not last long, as Victor (from “A Visit To Anthony”) the “neighborhood sadist” shows up with a chainsaw, chopping down his neighbor’s trees for fun. Chopping down the one Stimpy wash hiding in, he notices him, but Stimpy refuses to come out “naked”. Victor says he will trade Stimpy his “BVDs” for a whack at punching him in the gut, telling Stimpy he has nothing to fear as he is a “professional” bully (with a license). Victor beats Stimpy, as Victor’s Dad watches from his car. After getting beaten up, Stimpy asks Victor if they can make the trade, but Victor insists they have to do it where nobody is around.

After Victor has lured him into the car, Victor’s Dad drives them to the countryside, where he asks his son who Stimpy is. Victor says Stimpy is a dumb cat who he promised his underwear to. Victor’s Dad asks if its the same underwear his mother had embroidered for him for Christmas, to which a remorseful Victor tells his dad “yes sir”. Telling his son that it would break his mother’s heart, he offers Stimpy his underwear, claiming he needs to change them (since it’s now the month of June and he still hasn’t). Victor’s Dad reaches down his pants as he drives to rip off his underwear, and proceeds to taunt Stimpy with them, to the point of tears. Beating and torturing Stimpy to their fill, Victor’s Dad gives Stimpy his undergarments, but notes they are “baggy in the derriere”. Giving his son a knowing wink, he asks him to give Stimpy a rope to use as a belt; however, it’s a dirty trick as Victor’s Dad screams at him to “GET OUT!” as they throw him from their speeding station wagon, where he skids across the road. Victor and his Dad laugh at Stimpy’s pain, distracting them from the road, causing them to drive off a cliff, them and their car exploding at the bottom.

Stimpy gets up weakly saying “I’m beat up, dirty, and lost in the woods… but I got my pants!” As he pats his butt. Suddenly, Stimpy hears a loud voice from behind him, telling him not to turn around. Revealed to be a “Male Cow” ( with udders), the Cow uses one of his teats like a gun aimed at Stimpy’s back, telling him that it’s a stick up and warning he hasn’t been milked in 2 weeks, and “could go off at any time”. He demands Stimpy turn over his underwear to him, which Stimpy agrees in fear. The cow puts on the underwear, forcing Stimpy to look at him and his udder (that’s teats poke through the fabric) remarking how they are good and “snug”. Stimpy says how nice he is before he tells Stimpy to turn around again, this time, charging at him, headbutting him into the “Deep Dark Woods”, saluting him good luck, as he’ll need it.

Night falls, an a trapped, lost and “naked”, Stimpy looks around in terror as he starts to see other wild animals, including lions and whales, who are all well dressed, unlike him. They begin to chant at Stimpy “Where’s your pants?!” and they increasingly grow louder and faster. Stimpy sees clothed alligators, lobsters and possums, all closing in on him. But all of a sudden, they are all frightened away by a mighty roar. The ground shakes with every footstep the “beast” makes, as Stimpy can only cower in fear. Finally, its revealed to be the biggest, baddest creature of them all- a huge, towering, muscular grizzly bear dressed much like and resembling Smokey the Bear. He asks Stimpy what the problem is and he tells the bear he has no pants. “Thunderation, boy! You’re as naked as the day you was born!” The bear replies. He proceeds to shame Stimpy, telling him that nudity is sick, and “maybe” he can get away with it in the city, but not “in this neck of the woods!” Stimpy says in fear he wants to wear clothes, so the bear, seemingly understanding a bit, offers him a terrifed squirrel to cover his bottom half with. Later, Stimpy wears the small rodent by tying his legs behind him, getting the attention of a group of animals who awe in approval. Stimpy thanks the bear for the “clothes” and for making him a trendsetter before heading home. (Although sending him off kindly, the bear still thinks deep down Stimpy is a sick creep for being nude in the first place)

Stimpy tells the story to Ren, to which the squirrel attests to also. Ren tells Stimpy he is still a cat and does not require pants, however he instead offers Stimpy and the Squirrel two gowns to wear, to which Stimpy and Squirrel react with excited shrieks . Now with all three dressed like women in gowns and flowered hats carrying purses, Ren suggests the “gals” go to the malt shop to show off their new outfits, to which they all laugh (Ren the hardest)