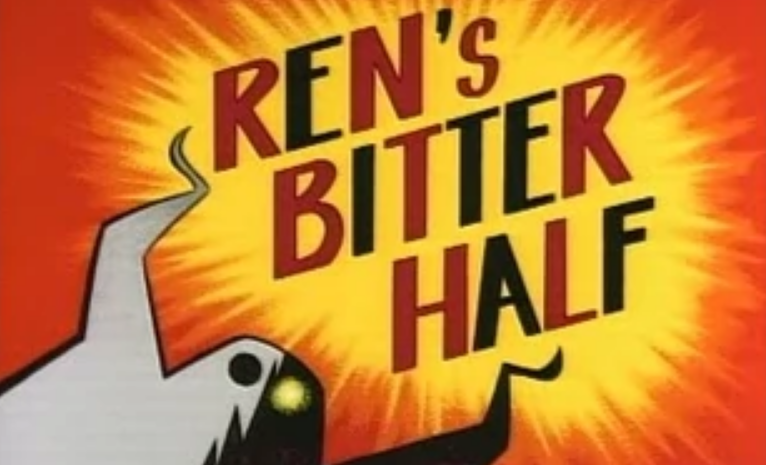 The episode begins with Stimpy working in his lab, when Ren comes in, demanding to know what Stimpy is up to. Stimpy shows Ren his buttocks, revealing that he now has three buttocks because of the gene splicing formula, XB-49. Ren likes the idea, but asks why Stimpy hasn’t made him dinner. Stimpy advises Ren to be careful with the formula, but Ren shakes it up out of spite. It pops and gets on him. Ren begins to split apart, into two forms, based upon his personality: the villainous Evil Ren and the apathetic Indifferent Ren. Despite his initial horror, Stimpy rejoices, as he now has two best friends, although Evil Ren continues to mercilessly punch Indifferent Ren.

Later, the trio watch television. Evil Ren continues to hit his twin. When Stimpy asks Evil Ren to stop, he gets hit. So, Stimpy asks Indifferent Ren to stop getting hit, Indifferent Ren doesn’t mind. Stimpy asks if Evil Ren is tired of watching cartoons, which causes him to take the television and throw it at them. A girl scout comes to the door, asking if Evil Ren wants to buy cookies. He chews them up and spits them out into the bag, refusing. Evil Ren then goes back into the house and turns the television on, electrocuting the two.

Later, Stimpy decides to take Indifferent Ren out for a walk. After they leave, Evil Ren bolts the door shut. Twelve hours later, they come home to see that Evil Ren has turned the house into his own lair. They find him on top of a vat of acid, dressed as a dictator/mad scientist. Evil Ren drops Stimpy’s favorite record (Happy Happy Joy Joy) into the acid, and Stimpy realizes what he is doing after it dissolves. He then drops Stimpy’s favorite catnip mouse, Mousey, into the acid, where it dissolves. Finally, he drops Stimpy’s Litter Box, despite Stimpy begging and much to his horror. Stimpy passes out, refusing to believe that Evil Ren is his Ren.

Later he wakes up chained to a metal board with Indifferent Ren. They see Evil Ren mixing together various chemicals, until Stimpy realizes it is XB-49. Stimpy pleads with Evil Ren, saying that without being indifferent, he is becoming corrupted and that the two need each other to function. Evil Ren refuses, spitting in Indifferent Ren’s face. Stimpy says that he’ll help put them back together, because without being indifferent, Evil Ren is only half a man. For a second, Evil Ren says that Stimpy might have a point, as he’s seen a part of himself that no man should ever see, but he reveals his true colors by saying that he likes being evil, dumping the chemical on him. Stimpy fantasizes that if Evil Ren were to replicate himself, he’d be able to create an army and causing a second Holocaust (and possibly a World War III), dooming humanity. Finally, the splitting is done, but leaving Evil Ren with another twin: Hideously Evil Ren. Unlike the other two, Hideously Evil Ren is a female, although very homely and ugly. After seeing her, Evil Ren falls in love, much to the shock of Stimpy and Indifferent Ren.

This episode is banned from Nickelodeon due to heavy references to Nazism.

On Spike airings, the dialogue between Stimpy and Indifferent Ren inside the TV about how mean Evil Ren is was cut.

In one scene, Indifferent Ren’s mouth does not move when he says “Whatever”.