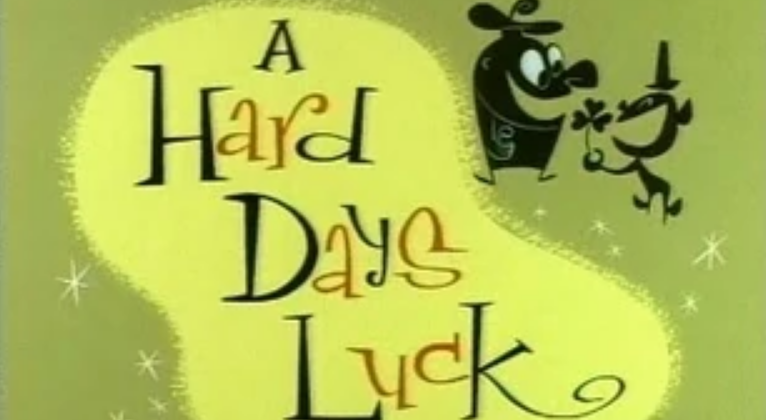 “A Hard Day’s Luck” is the ninth episode of Season 4.

One morning, Haggis MacHaggis wakes up only to and sadly looks in the mirror. He then calls for his houseboy, Marvin to help with his hair (he rips off Marvin’s back hair and tries taping it to his head), but that fails. Then Haggis wishes that he had hair.

Later on at breakfast, Marvin finds a “Just add water” leprechaun prize. He spits on it and it turns into a REAL leprechaun. Haggis thinks it’s a “foreigner”, and orders Marvin to throw him out. But the leprechaun tells Haggis he’ll grant anything he wishes for. Haggis orders the leprechaun to give him hair. The leprechaun agrees, but said Haggis must first pass a test. Haggis agrees with him. For the first test, the leprechaun says, “Can ya keep your temper?” He tells a story about an ugly little Scotsman (really Haggis) who was always angry and had three sons. The leprechaun plucked out one hair at a time, acting like it’s one of the Scotsman’s three sons and this really makes Haggis mad. He starts to beat up Marvin, and then the leprechaun takes away Marvin.

Next, for the second test, the leprechaun wants to see an act of kindness from Haggis. A clam asks Haggis to take him back to the ocean, Haggis but throws him instead. Then the leprechaun gets mad and takes Haggis' clothes, his money, and his palace.

Then the leprechaun gives Haggis one last chance. He tells Haggis to pass a test of courage, proving that Haggis is not afraid of “the dark”. So they put him down a well and the leprechaun says if he could last more than 1 minute in the well, Haggis wins. But if Haggis loses, the leprechaun gets to keep his shillelagh. So Marvin and the Leprechaun lower Haggis down the well. Haggis doesn’t see why he has to be scared, but he does when Marvin sits on the well. This causes the well to grow dark. And Haggis says “Well at least there’s no snakes!”. But Marvin and the Leprechaun are shaking dice above making it sound like there are snakes in the well. Then Haggis gets creeped out and says " Well uh.. certainly there are no MONSTERS?" And above the well Marvin is drinking his soda and when he burps, it makes it sound like there are monsters inside of the well. Then Haggis starts to get scared. He looks to his left and his mind plays tricks on his eyes making it look like he’s really seeing monsters. Haggis is then really frightened, and he then lights a match and finds Scotsmen skeletons at the bottom of the well. Then he hears a gruff voice say, “Hey buddy! Got a light?” He looks to his left again but this time he sees a REAL MONSTER! This makes Haggis so scared that when he screames, his brain jumps out of his head and runs up the walls! Haggis then runs straight out of the well and he starts to cry because he didn’t win. This makes the Leprechaun feel horrible about taking Haggis' things. “All right!! Shut uuup!!” screamed the Leprechaun. He then lets Haggis win by making him eat a bean that will grant him his wish. Haggis does so and then a stem of black hair comes out of his head and his wish comes true! He then hops off into the sunset but explodes for some weird reason.

List of production music used in the short below.