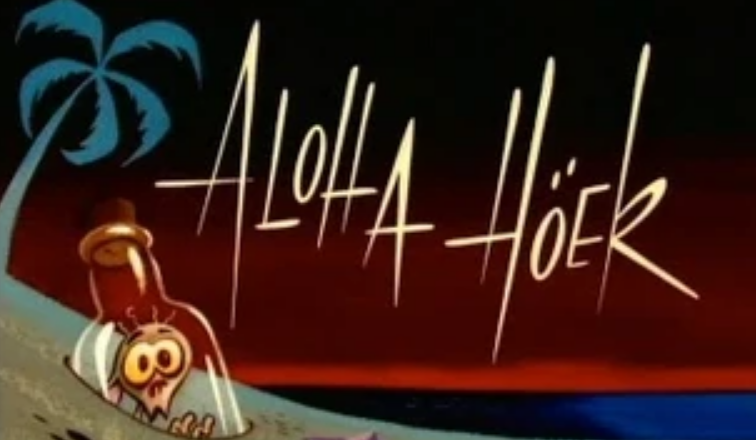 One beautiful day, Ren and Stimpy wash up on Hawaii. They both get up and Ren suggests that Stimpy builds a house to protect the two. Later on, Stimpy has built a house made out of sand. That night while the two are sleeping, the water on the beach eats the house. In the morning Ren tells Stimpy he should have used “water-proof sand”. Ren then goes to find a house but shortly runs into a giant whale carcass. Ren runs away frightened by the sight, but Stimpy says for both of them to try it out, saying it might be a perfect shelter.

When they go inside, Ren says that they could live there. They live it up, with Stimpy bringing Ren kelp and dead coral to eat. Some time later, Ren and Stimpy are inside the whale and Stimpy starts to complain about how hot it’s getting and about the smell and about the worms. Ren gets grumpy and kicks Stimpy out. Ren tells Stimpy to run away into the jungle. Stimpy does so and when he stops running he hears Hawaiian music on the other side of some vines. He opens up the vines to find an obese man being served by two Hawaiian women.

Stimpy introduces himself to the obese man. The man then tells him that his name is the Big Kahuna, then he allows Stimpy to stay. Later on at night in the whale carcass, in the stomach Ren is roasting fish gall stones over a fire. Then the Big Kahuna comes over and knocks at the door. When Ren answers it thinking it’s Stimpy, the Big Kahuna is wearing a witch doctor mask, which scares Ren away. The Big Kahuna then leaves the carcass.

Ren is then hiding under a whale tonsil thinking Stimpy was killed and eaten by cannibals. Later on in the morning, Big Kahuna laid out for Stimpy a feast of chicken wings, rice, sauerkraut, and beans, octopus pie, ratatouille, some kind of bug (a hermit crab), some kind of slug, and a Portuguese man-of-war jellyfish.

Twelve years later, at night a crab family returns home from their vacation to the whale carcass. But they find out something is wrong with the place, ala Goldilocks and the Three Bears. They then find Ren laying on a whale tonsil and decide to eat him. Ren says he’ll do anything they want if they don’t eat him, and the daddy crab agrees and tells Ren to walk the fly. The next morning, Ren tries to escape from the island on the fly. But when the two start to go high, the fly falls in the water, and Ren starts to drown.

Later on that evening the fly brings a “dead” Ren to the island to Stimpy and the Big Kahuna. The fly tells Stimpy that Ren is not okay. Stimpy starts to cry over his best friend. And finally yells out “He..was..my..friiiieeeeennnddd!”.

But then a watch on Stimpy’s wrist starts to buzz, and he and “Ren” pull of their masks, revealing them both to be Russian communist spies. They both say that their mission is complete, and they both head back home on a Russian submarine, and the Big Kahuna waves goodbye as he cooks the crab family.

The episode received negative reviews from fans like “It’s a Dog’s Life”. This is one of the rare episodes that is considered to be the worst episode of the original series by fans. The episode was criticized for the ending where the Russian communist spies have been disguised as Ren and Stimpy the whole entire time, Ren being unlikable in the episode by telling Stimpy to leave the whale carcass in an unpleasant way, that leaves Stimpy to a place where he gets something good, the heavy use of gross-out material and the mean spirited and unfunny vibe felt in the episode later on as Ren is to be tortured the entire episode until he later dies in the end after drowning in the water with the fly, who couldn’t fly any further, these reasons were why the episode was hated.