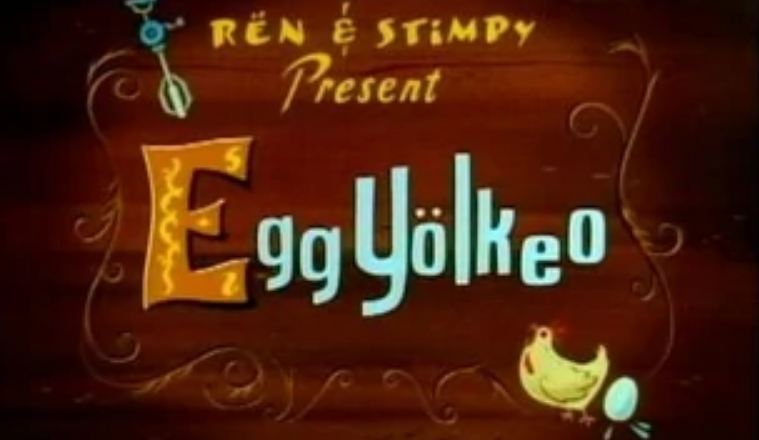 “Egg Yölkeo” is an episode of Season 4.

Ren (as Renwaldo) creates a son made from egg yolks and names him Egg Yölkeo. But when Egg Yölkeo gets kidnapped and taken to Las Vegas, Ren is distraught and tries to find him.

Renwaldo, the Egg Smithëe, feels his life is unfulfilled and so makes his own son out of egg yolks, wishing that he were a real boy. To bestow the ‘boy’ with sight, Renwaldo stitches in brass button eyes, gives him locks of his own hair for warmth and a part of his own brain for intelligence. Stimpleton, his assistant, supplies the clothes (Lederhosen) he takes from a corpse dug up from a graveyard.

Despite their efforts however, Renwaldo grows depressed that his ‘son’ remains a lifeless clump of egg yolks and desperately wishes for a real son. His wish is granted that night by a headless chicken fairy who brings Renwaldo’s creation to life through a salt shaker. The next morning, Renwaldo sees his new son and tearfully rejoices, naming him Egg Yölkeo. Egg Yölkeo drools and is seemingly capable of only giving gargled screeches as speech. Renwaldo however, loves the boy dearly, crafting him a bed in the fridge and spends time teaching him table etiquette and driving. This catches the attention of two swindlers, who kidnap Egg Yölkeo to perform shows in Las Vegas, leaving Renwaldo distraught.

When Renwaldo eventually finds out where his son is, though, he immediately goes to Vegas to retrieve him. Egg Yölkeo proves to be a hit sensation with the crowd and when Renwaldo bursts into the studio to take him back, is run over by crazed fans who proceed to tear Egg Yölkeo apart in their frenzy. Renwaldo throws himself into the mass and succeeds in saving his son, albeit Egg Yölkeo has now been reduced to just a head. They return home and Egg Yölkeo weakly garbles to his father that he loves him. The next morning, Renwaldo happily awaits spending time with his son again, only to find his bed empty. He then notices Stimpleton eating an egg sandwich and, realizing what has happened to his son, screams in panic. His cries surprise Stimpleton who opens his mouth. From inside Egg Yölkeo is heard, uttering a final ‘I love you daddy’ before he is ingested. The episode ends with panicked Ren screaming hysterically, as he began to freak out.