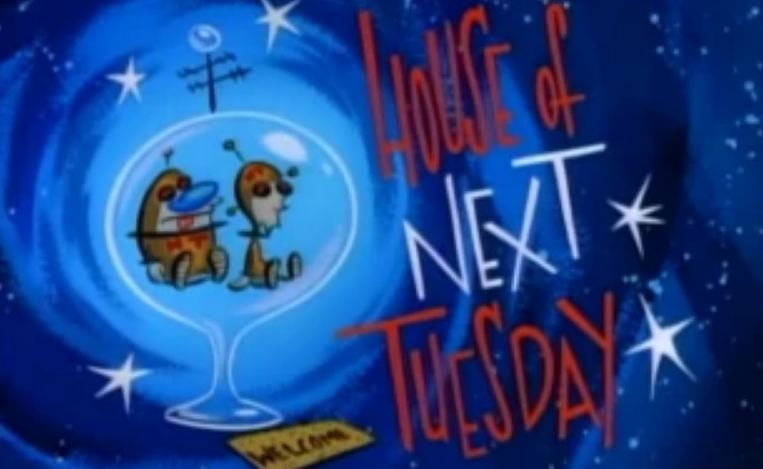 “House of Next Tuesday” is the second episode of the fourth season.

Ren and Stimpy get a free trial of the House of Next Tuesday, the amazing house of the future. The first thing they discover is the Jerky 2000, a futuristic machine for making beef jerky. Ren accidentally falls into the machine after Stimpy turns it on and is turned into beef jerky. Next, the two of them try another food-making device that “spits out” seafood. Ren is thrilled, until Stimpy turns it on and the two of them are doused in pre-chewed plankton from a whale’s mouth. Afterward, Ren rushes to the bathroom.

Unfortunately, the toilet seat is freezing cold. Stimpy turns on the toilet seat warmer, which turns out to be a large guy who sits on the toilet to warm it up. Ren leaves the bathroom and finds Stimpy with a strange helmet on his head. Upon Ren’s obvious query, Stimpy informs him that it’s a helmet that will allow him to go inside TV shows. Ren decides to try it out and Stimpy finds him a channel with a cooking show. Ren replaces the chef and is delighted by the aroma drifting from the pot on the stove.

Unfortunately, Ren turns into the lobster that the chef produces and is plunged into the boiling water. He runs around screaming in pain whilst Stimpy worriedly inquires as to what he’s watching. It is at this point that Ren takes off the helmet and hurls it at him. Now turned into a lobster, he storms up to Stimpy and cuts his nose off with a claw. That night, the two visit the bedroom of the future. Ren is incredulous when he sees that there’s no bed in the room, but Stimpy produces an Insta-Bed pill.

Upon adding a drop of water to the aforementioned pill, a bed springs up out of nowhere. All is well until Stimpy wets his pants in his sleep, causing the bed to swell to an incredible size. Rather than leave the house, the two decide to use a time machine. Unfortunately, the time machine takes them back to when Ren, as a lobster, was being boiled. The episode ends with Ren screaming and Stimpy shrugging at the camera.