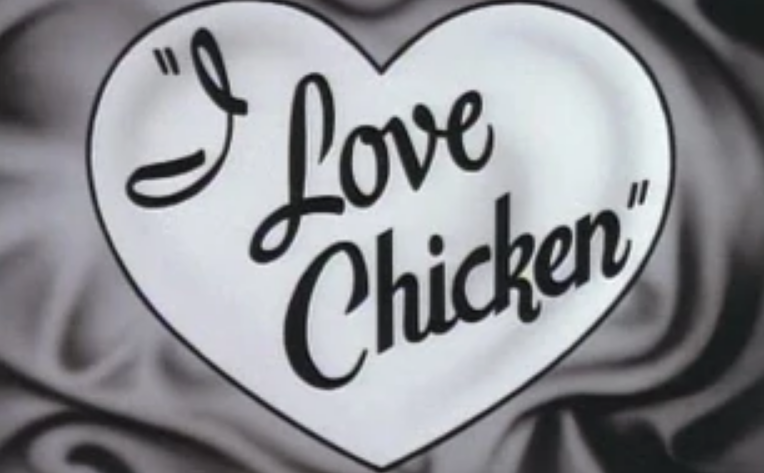 “I Love Chicken” is the tenth episode of the fourth season.

Stimpy falls in love with a raw chicken that Ren wanted to eat.

The episode begins with Ren coming home from work one night with groceries. Stimpy waits on him, bringing Ren his slippers and pipe. After Ren confirms that Stimpy did the housework, he tells Stimpy to make them dinner. After going through some of the groceries, Stimpy sees a chicken - who he dubs Chicken - and decides to cook it. However, after beginning to get it ready, he realizes that Chicken is sentient, as it grabs his hand. Stimpy and Chicken have a love at first sight meeting and fall deeply in love. Ren, tired of waiting, goes into the kitchen, seeing Stimpy and Chicken kissing, and calls them ‘skulkers in the dark’. Ren is outraged and demands his dinner. Stimpy berates Ren, as Stimpy loves Chicken. Stimpy says that he and Chicken have become engaged, to Ren’s shock. Stimpy and Chicken leave to go to Las Vegas and get married. After a two week honeymoon, they return home to find Ren still waiting on dinner. Stimpy still refuses to cook it because he’s tired from the drive, which angers Ren. That night, Chicken sleeps in the same bed as Ren and Stimpy. After Stimpy falls asleep, Ren kidnaps Chicken and replaces it with a football. In the kitchen, he tries to cook it, but Stimpy comes in, thinking that Ren is trying to make a snack for himself. Putting two and two together, Stimpy realizes that Ren is trying to cook Stimpy and he rescues it. Stimpy still refuses to let Ren to eat Chicken and brings it back to bed, Ren vowing to eat it. The next day, Ren gets jealous of Chicken, as Stimpy lavishes attention on it, giving it Ren’s slippers and fez. After Stimpy goes to get Ren’s pipe, Ren kidnaps Chicken again and replaces it with a pineapple. When Stimpy gives it the pipe, he realizes what has happened. He goes into the kitchen to find Ren turning Chicken into sausages with a meat grinder. Although Chicken still lives, it has been reduced to sausages. Stimpy scolds him for this Ren by lightly slapping his cheeks and saying that he and Chicken ‘don’t abide coveters.’

The next day, Ren gets jealous when Stimpy compliments Chicken and begins to cry. He tells Stimpy that he is upset that Stimpy isn’t paying attention to him and he misses him. Stimpy says that they’ll always be best friends. Stimpy suggests that they should go out and Ren suggests a picnic, to which Stimpy agrees.

At the picnic site, Ren forgets the ketchup and decides to drive home and get it. After a night of waiting, Stimpy gets a ride home. He comes home to see Ren eating some sausages and realizes that Ren has eaten Chicken. Stimpy sobs on the bed for months out of grief. Ren tries to console him, saying that Chicken gave him bad gas. However, when he doesn’t come around, Ren yells at him because he is tired of his ‘bereaved chicken widow crap’ and forces Stimpy to cook them dinner. While going through the groceries, Stimpy sees a goat head and falls in love with it at first sight. Stimpy comes out of the kitchen, announcing to Ren that he’s engaged again, much to Ren’s shock and horror.