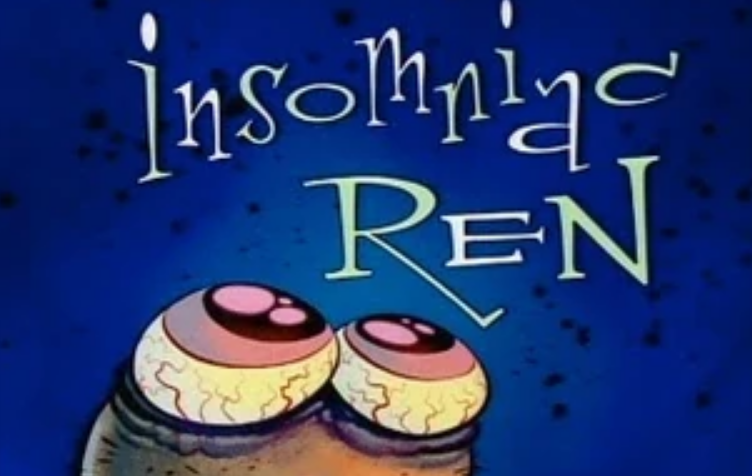 “Insomniac Ren” is the 18th episode of Season 4.

Ren is getting ready for bed. He tells Stimpy, who is also getting ready for bed, that they need to sleep for his 6 AM tee off. Ren gets annoyed with Stimpy and tells him that he will give him until the count of 3 to get into bed. Stimpy makes it to bed in time and Ren goes to sleep. Ren hears a sound of water running, and tells Stimpy to get back into the bathroom and turn the water off. Stimpy gets to bed easily with what he does but never gives up.

Ren angrily tells Stimpy to be quiet. It is then revealed that Stimpy is already snoring away. Stimpy begins to snore louder than a dog barking. Ren uses a log and some soap to stop Stimpy from snoring so loud, but Stimpy just snores right through them! Ren goes to sleep in the living room, thinking about it being so quiet. Ren eyes the clock (along with a bug yelling “WHAT?!?!”). Ren turns on the TV, thinking it will help him fall asleep. However, the TV channel goes off-air and cuts to static just as Ren turns the TV on.

Ren goes back to his own bed and thinks that he’s too smart to sleep. He agrees with this and says that Stimpy’s asleep because “he’s an idiot”. Stimpy has a dream that he is nursing six kittens who look similar to him and one that looks just like Ren. Ren also appears in his dream and asks Stimpy “How am I supposed to sleep with all this peaceful dreaming going on?!?!” Ren tells Stimpy to wake up. Stimpy gets Ren a glass of milk (really camel saliva) making Ren vomit.

Stimpy reads Ren a book, which frightens Ren and causes him to angrily punch Stimpy. Stimpy then sings Ren a noisy or a catchy lullaby for hours. Ren isn’t affected by the music, but Stimpy is. It becomes 6 AM and Ren’s alarm clock rings. Mr. Horse, Muddy Mudskipper, and Haggis McHaggis come and tell Ren to get up. Ren tells them that he will give them $5 if they knock him out. Mr. Horse, Muddy Mudskipper, Haggis McHaggis, and Stimpy eventually knock him into a coma and go golfing.