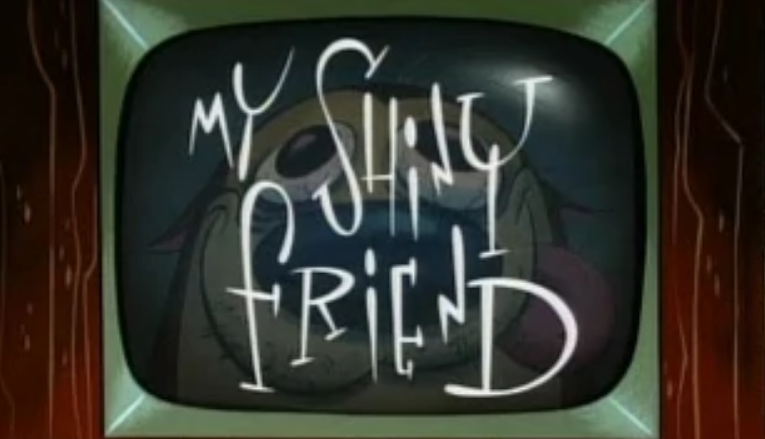 “My Shiny Friend” is the 19th episode of Season 4.

One day,Stimpyis watching T.V.Renis supposed to go to work and thinks that Stimpy shouldn’t spend all day watching television and tells him to do the ironing. Soon after Ren leaves, Stimpy ignores him. Later on that night, Ren comes home from work and finds Stimpy watching “The Three Stooges”. Ren tells Stimpy to cook dinner for that night for the both of them. Then Stimpy cooks dinner by watching the show, “Cookin' with Chicken”, and the chicken catches on fire by accident. Later on, Ren goes to answer the door, and the firemen come in and eat the chicken with Stimpy and watch, “Fire Patrol”. Later, Ren finds that Stimpy won’t let him sleep with him, reserving the space for the TV instead. Calmly, Ren kicks the TV out, and then Stimpy. The next day Ren tells Stimpy to play with his friends instead of watching T.V. Stimpy does so and Ren catches Stimpy and his friends watching “Muddy Mudskipper” atop a tree. Ren then buries the T.V. underground. Later on, Ren goes underground and catches Stimpy and a mole watching T.V. Ren takes Stimpy and the T.V. above ground, runs up to the T.V with a shovel, and destroys the television set. Unfortunately, this causes Stimpy to have an emotional meltdown, like a baby. Ren then slaps Stimpy to make him calm down and Stimpy calmly tells him that he had an accident but he’s alright. Later that night, Ren forces him and Stimpy to stay in the dark and read in order to curb his addition. Stimpy asks to use the restroom multiple times for some reason. Ren then knows something is wrong after Stimpy tells him that he has to go do ‘Number Three.’ He peeks through the doorknob and sees Stimpy pull a T.V. out of the toilet. Stimpy watches it for hours. Ren then kicks the door down, and sees Stimpy on the floor. Stimpy is seen glowing and green. Ren then finds out that he’s been overdosed on T.V. Ren then puts Stimpy somewhere where he can’t hurt himself anymore: the basement.

With Stimpy gone, Ren sits next to a fireplace reading a book called ‘Poems’ and listening to Italian opera music while shedding tears. In the basement, Stimpy has a nightmare that Muddy Mudskipper chases him and eats him. Stimpy then wakes up and prays to God saying, “I want my TV!”. Ren doesn’t hear him as he’s fallen asleep. After one year, Ren is impressed with his friend’s behavior and finally decides that Stimpy is cured and releases him. Ren goes to work and Stimpy promises not to watch T.V. Keeping his word, Stimpy goes inside and plays dice at a bargaining table with his friends, meaning that his addiction has transferred to gambling instead. Then the episode end with Stimpy offscreen saying “Craps!”.