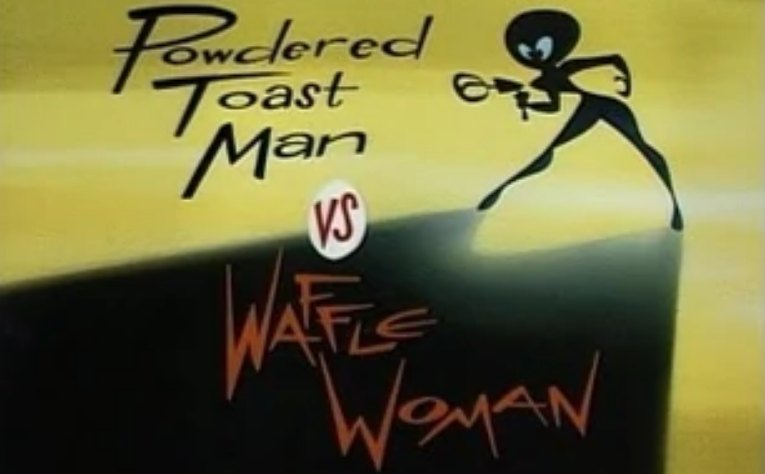 “Powdered Toast Man vs. Waffle Woman” is the 11th episode of Season 4.

Powdered Toastman retires after failing to help Little Johnny. Waffle Woman uses this opportunity to seek her revenge on Powdered Toast, and an epic battle ensues.

Powdered Toast Man is at a church, implied to be giving a service as a pastor, but he is revealed to be playing bingo with the church congregation. The fun ends, however, when he is delivered a message in olive loaf, which to decode he must insert into his head. It shows a small boy named Little Johnny who is laying in a hospital bed, perhaps, terminally ill. Powdered Toast Man leaves the church (destroying the bell tower on his way out), and heads to the hospital, materializing in Little Johnny’s room. Jimmy explains that he wants to see the President (“before he takes his nap”) a wish PTM promises to fulfill, claiming the President “owed him one”. As Powdered Toast Man leaves for his journey to find the President, his arm gets caught on Johnny’s IV, ripping it out of his arm in the process.

All these events are shown to be on the television of a woman named Missy Belgrove, which she has been watching in absolute hatred of Powdered Toast Man. She tells the story of how she was once the president of the “Liquid Waffle Co.”, creating waffles with “super Vaselinated action”. Her business boomed, she became “queen of the breakfast food industry” and was worth millions of dollars, out competing with “foods” such as “Spray On Grits” and “Bacon Flakes”. However, that all changed for her when Powdered Toast Man entered the picture. Sales plummeted for Liquid Waffles and it destroyed her business. Missy vows her revenge on Powdered Toast Man for ruining her. At the U.N. Building, the President is about the sign “The Treaty To End All Wars Forever”, but is interrupted by Toast Man, who lands on his desk, grabs him and flies away, leaving two Arabic Leaders furious. Powdered Toast Man looks at his watch as the President clings to his buttocks, realizing Johnny’s nap time is approaching, so he decides to fly back to the hospital at “warp speed”. PTM flies increasingly faster to the point he catches on fire and files like a comet; The President takes the brunt of the abuse.

Just as Little Johnny gets tucked in bed, Powdered Toast Man arrives just in time, but by the time they got there, the President was so burned the wind and heat, he was dead and all that Powdered Toast Man could pull from behind his back to show Johnny was his ashes and a few charred bones, which blew away. Little Johnny proceeds to cry his eyes out like a faucet before passing out. A enraged nurse confronts Powdered Toast Man, telling him that he should be ashamed for destroying a little boy’s dream and tells him he is a failure. Powdered Toast Man leaves the hospital in shame, as the newspaper headlines read “Powdered Toast Man Lets Down Little Johnny” and “World At War-Planet Doomed” (since the President died and couldn’t sign the peace treaty). Powdered Toast Man sits at a bus stop outside the hospital, and tries in hopelessness to process the situation. Thinking about what the nurse told him, he decides he has indeed a failure, and when he let down Johnny, he also let down all of humanity. Having failed the world, Powdered Toast Man leaves the Earth in disgrace, moving to his secret hideout, a satellite resembling a gigantic breadbox called “The Breadbox of Solitude”, to live out the rest of his years. Powdered Toast Man views pictures of the past and several of his “accomplishments”, showing him causing the sinking of the Titanic by rescuing a penguin, blowing up the Hindenburg and causing the infamous disaster by lighting a cigar too close, and a photo of Richard Nixon resigning the U.S. Presidency (possibly implying Powdered Toast Man was involved in the Watergate Scandal or caused it) before tearing his “shorts” off his body violently before nailing them to the wall along with said photos, “hanging them up… for good!”

After reading the headline of “Powdered Toast Man Retires!”, Missy sees it as the perfect chance to get her revenge. She returns to her now abandoned liquid waffle factory, where she turns on a giant waffle iron and jumps onto it before it began to close with her inside. She cackled as it heats up as more power goes to it as all the machines in her factory went into overdrive. After a lightning storm, she emerges from the iron, now wearing a brown leotard and a waffle mask she declares that it’s the return of “Waffle Woman!” She flies a eggbeater to “Powdered Toast Intl.” to destroy it, as Powdered Toast Man, depressed, sits in the dark in his underwear, eating jars of mayo while watching Stimpy’s “I Like Pink” (from Stimpy’s Cartoon Show) until Waffle Woman hijacks the airwaves and begins to say “calling Powdered Toast Man” as she challenges him to a battle. He doesn’t care until she reveals to have kidnapped Little Johnny and threatens him that she will force the boy to go to bed without TV. (To Johnny’s horror) Seeing Johnny being tormented, Powdered Toast Man has a moment of self conflict, but decides to save Johnny, vowing to do it (getting struck by a thunderbolt, actually a bad circuit) as he heads back to Earth, destroying his breadbox home in the process (it’s implied that it crashes on Hollywood out of the sky) he heads to the now destroyed Powdered Toast factory to confront Waffle Woman.

Waffle Woman taunts Johnny with a TV, as Powdered Toast Man arrives to Johnny’s happiness and Waffle Woman’s anger as she throws an iron at his face. Waffle Woman says that he was too early for this battle, as he always is and fires a pair of giant, explosive strawberries out of guns at him. He dodges them, but they go on to destroy the hospital Johnny was staying in. PTM says to Waffle Woman she was late for their last battle as he fires “Super Oleogenus Butter Pats” out of his head at her, which she ducks, as they hit the U.N., blowing it us as well. (Angering the Arab Leaders once more) Waffle Woman asks “What battle?” Aiming her “Radioactive Polythermal Syrup Launcher” at PTM, she fires it at him. Popping his head off like bread out of a toaster, he says “Boy, she’s really mad” as the syrup covers New York City, exploding it, too. Powdered Toast Man tells he to stop “waffling” as he mentions he left a message with her secretary, as he launches “Nuclear Powered Hyper Acidic Marmalade” at Waffle Woman out of his navel, who it misses as she denies talking to her secretary, going on to blast a hole into England, sinking it into the ocean. Their battle continues as they argue like a married couple, gradually destroying the Earth bit by bit with each attack.

Later, as they stand in rubble, Waffle Woman asks Powdered Toast Man if he’s had enough, to which he replies showing one final trick up his sleeve, the source of Waffle Woman’s power, the giant waffle iron that created her. He picks it up and crushes it, as Waffle Woman says she feels “a bit queer”, as without the iron, she melts into a formless,brown, humanoid blob, floating into the sky and swearing her revenge on Powdered Toast Man (“maybe”). Toast Man hears little Johnny call out cheers of victory to his now once again hero. Redeemed, and having found dignity once again, Powdered Toast Man salutes after being thanked by a grateful Johnny, as the announcer says in the name of “ignorance, prejudice and the American “waste” (truth, justice and the American way) Powdered Toast Man has again made the world save “for little Johnnies all over the universe” as the camera zooms out, revealing that the price for this is that Powdered Toast Man and Waffle Woman have completely destroyed the Earth in their battle, leaving only small, floating chunks of Earth drifting around in space and Powdered Toast Man and Johnny are the only survivors. (Possibly referencing the Daffy Duck and Marvin the Martian cartoon “Duck Dodgers in the 24th 1/2 Century”)

This episode was banned from re-airing after the September 11th, 2001 attacks. Blatantly due to a scene involving the Twin Towers of the World Trade Center being destroyed. This episode will either air on MTV and The Splat (Nick-Splat) due to Nickelodeon banning the episode 17 years later. It is still available on DVD. However, the scene with the Twin Towers is still shown.