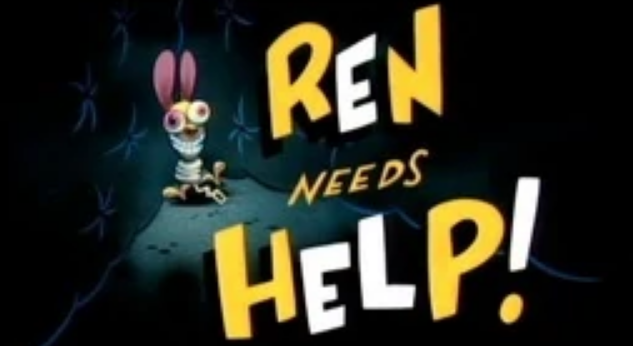 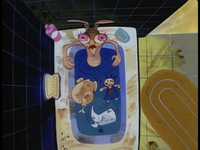 A catatonic Ren soaking in the tub with various items.

The episode begins with Ren being shown in a state of insanity, babbling to his several important possessions, including his favorite chair, Danny, and his collection of glass coffee tables, Danny, Raymond, and Desi. Soon, Stimpy returns home, while Ren sits in a bathtub blank-eyed and crazily putting lipstick on. Ren tells Stimpy that he’s fine. Stimpy decides to play golf in the house, getting his golf ball in Ren’s chair. He uses his cleats to non-intentionally destroy the furniture and uses the golf ball to accidentally destroy the coffee tables. Ren comes out of his bath and sees his possessions are destroyed, but decides to act calm instead of injure a fearful Stimpy. He says that he has to go end it all, muttering and laughing. Stimpy becomes concerned, as Ren shuts him down, as he believes that Stimpy has had it coming. Ren tries to happily kill himself by putting himself into the trash compactor. Stimpy becomes concerned and calls the Shady Brain Farm. Soon, they arrive, and take away Ren, after accidentally taking his chair. 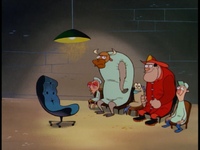 A few patients (including Ren) waiting for group therapy to start.

At the facility, Ren is content, as he can live among his own kind, which include the Yak from “The Royal Canadian Kilted Yaksman”, the Fire Chief, Muddy Mudskipper, and several others. He is ordered to go to group therapy, where the therapist is Dr. Sloth. Ren finds group therapy boring and falls asleep. Mr. Fire Chief is in therapy because he believes that everything is fake, including food and the president. Next is Muddy, who has a problem with Yak, who has a problem with the word ‘cheese’ which causes him to scrape his behind with a cheese grater and get taken away to electric shock therapy, returning in a straitjacket. Finally, it’s Ren’s turn and he confesses that he has a roommate (Stimpy) that makes him mad and he smacks him when he does. The others are shocked and afraid, including Dr. Sloth and the other patients, who order him to leave. Later, Ren goes to bed and writes to Stimpy to come and visit.

A month later, Ren goes to lunch where Muddy is serving everybody creamed corn. Ren asks for steak, but gets the same thing.

Later, Stimpy visits Ren with a baby, that Ren joyously holds, but the child turns out to resemble the guard, much to his shock.

Ren gets taken away to be lobotomized after convincing the other patients to escape.

A month later, Ren gets the same meal and laughs it off. He begins to freak out, as he hates creamed corn, and says that there is one thing he hates more. Fire Chief thinks that it’s cheese, which causes the Yak to freak out. However, Ren realizes something and tells the others that they aren’t crazy, they’re just freaks and stupid. Each of them aren’t mad but suffering from their own problems. Ren tells them to escape, which all of them do, with the exception of him. Ren laughs, but for this, he is taken away and put into a straitjacket, to be taken to the Brain Room.

Later, a lobotomized Ren is put into a suit, tie, and wig on the moon, dressed as the president to give a speech, meaning that the Fire Chief was right.