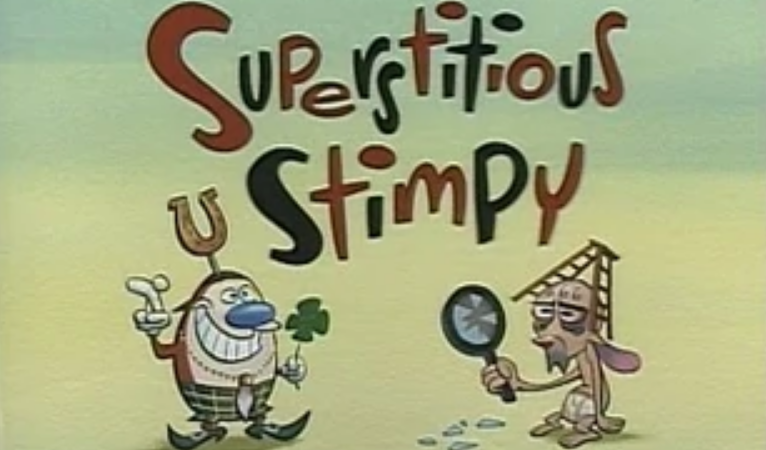 “Superstitious Stimpy” is an episode of Season 4.

Stimpy becomes superstitious when Tuesday the 17th arrives. Ren denies all of this until it’s revealed that he was born on that day, so Stimpy has to help him with his bad luck.

The episode begins with Stimpy nailing a boar’s head to the wall, creating a lot of noise. Ren enters and yells at Stimpy, asking as to why he is doing it. Stimpy explains that it is Tuesday the 17th, the most unlucky day of the year and that the boar’s head is to expel bad luck. Stimpy suggests that Ren kiss the boar’s head in order to combat bad luck, but Ren refuses, seeing Stimpy as stupid for listening to ‘old husband tales.’ Stimpy tries not to listen, as blasphemy causes bad luck. Ren decides to kick the boar’s head, but the body of the boar comes back and kicks Ren into the wall, which is more bad luck.

Ren yells at Stimpy to get in the house.

Later, Ren attempts to start his indoor barbecue. He orders Stimpy to go get the meat, but Stimpy says that cooking indoors is unlucky. He takes the carcass and goes outside with it, determined to stop their bad luck. After waiting half an hour, Ren goes outside to find Stimpy offering the carcass as a sacrifice, as beef carcasses are very, very lucky. Ren steals the carcass back and throws it onto the bed, which is more bad juju, and blasphemes by calling Stimpy’s paranoia ‘stuperstitions.’ He then calls juju to attack him, only to be struck by lightning. Furious, he orders Stimpy to go back inside.

Later, Ren cooks the beef carcass on the bed while making the atmosphere as unlucky as possible, which includes having Stimpy dress in black and cross his path. Despite Stimpy’s warnings, he dismisses his concerns and gets Stimpy to say that superstitions are fake and he is a moron. Eventually, he cooks the carcass with no bad luck. When Ren turns his head, Stimpy notices a wine red mark on Ren’s cheek, which he says is his birth mark. Going through his book of unluckiness, Stimpy discovers many telltale signs of unluckiness, including webbed toes, which Ren has. Stimpy also takes off Ren’s chef hat and discovers that Ren has a horn on his head and is the unlucky beast - the most unlucky person in the world. Ren admits that he was born on Tuesday the 17th and as a result, is cursed. Stimpy decides to help Ren counteract his bad luck through a variety of methods.

The first method involves having Ren gargle several things, including owl pellets, baboon drool and toad squeezing. The next method is to jump off the roof, as juju is scared of heights. Finally, Ren is dressed in a variety of unlucky devices, including a cinderblock hat with a rodent, underwear full of garlic, skunk shoes, mouthfuls of pig intestines and leeches on his arms. Ren must hold a pose until the next day to be certain his bad luck is completely gone, but Ren ends up swallowing the intestines after Ren must go to the bathroom. He goes to an outhouse and manages to defecate, but lightning strikes the outhouse and undoes Ren’s luck. Ren comes back inside, burnt to a crisp. To stop it, Stimpy decides to give Ren his family’s heirloom, a lucky leper’s foot. Ren kisses the foot and becomes luckier, but a leper comes in and takes the foot and starts to hit him with it. However, Stimpy says that Ren is very, very lucky, as he was hit by a leper.