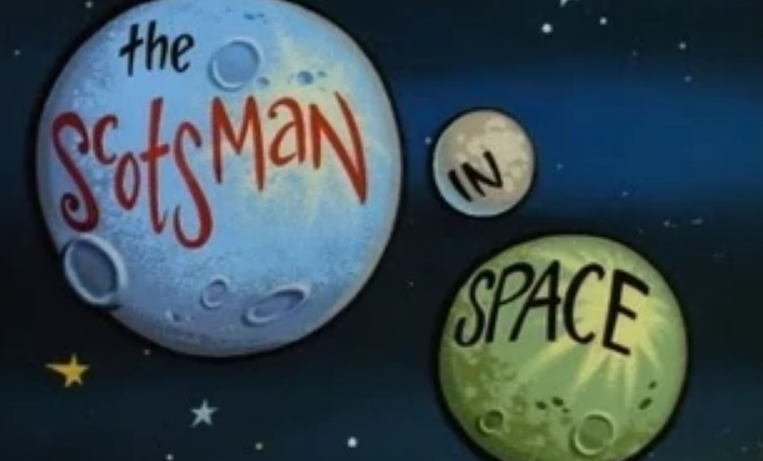 “The Scotsman in Space” is the 8th episode of Season 4.

Commander Höek (Ren) and Cadet Stimpy discover a bizarre Scotsman (Haggis MacHaggis, voiced by Alan Young) outside their spaceship and find a wallet attached to his hinder.

The episode starts of with Commander Höek (Ren) saying that he and cadet Stimpy are on a 36-year mission to the Corner galaxy for a pack of gum. Due to his exhaustion, Ren suspects Stimpy is plotting against him and says he’s beginning to see things. The silhouette of Haggis McHaggis floats across the screen, with Ren confirming that that is what he has been seeing. He asks Stimpy if he saw it, and Stimpy, believing he is tired, tells him he needs a coffee rub-down. Ren thinks he is blinded by the “space madness”, but plays along. He sees the silhouette again, and shrieks and tells Stimpy he had to have seen it. Stimpy pretends he sees what Ren sees (“a pretty green elephant singing in Chinese”), and Ren believes hat he and the silhouette are in cahoots. In his crazed state, he threatens to eat a passerby fly, while Stimpy pleads for him not to. As he eats the fly, Haggis floats right next to the spaceship window, with both Ren and Stimpy seeing him.

They allow him in and use their universal translators to try and communicate with Haggis, which is unecessary because Haggis speaks English. He says he has come looking for his sheep, but Stimpy thinks he said that he wants to eat. He cooks dinner in the Chee Z Bake Oven, which recognizes Scotland as a planet. Stimpy tells Haggis that he’s cooking a dish from his own planet (Scotland), which turns out to be haggis (the Scottish traditional dish). Haggis is enraged at the fact that Stimpy’s served haggis without chutney. As he freaks out, Ren holds him and Stimpy gives him a wedgie, which seems to temporarily sedate him. The pair decide that they will dissect Haggis. During the dissection, Stimpy scoops a chunk Haggis’ brain out with a grapefruit spoon and eats it. Ren decides that it’s time to examine Haggis’ tooth enamel, but Stimpy insists that he doesn’t have teeth because he’s Scottish. He takes out Haggis’ wooden dentures and throws them out the window. The two then perform the “wallet test”, which consists of cutting off a piece of Haggis’ trousers and removing his wallet with large pliers. But the wallet is attached to Haggis’ butt by a vein, and the disturbance wakes Haggis. He is angered that he has been touched, but suddenly starts to believe that Ren and Stimpy are his long-lost sheep and takes them to the meadow level of the spaceship, making them graze. He also shears them and dress them as Scotsmen. When they make him breakfast, Haggis flips out at the fact that his eggs have been overcooked and has a seizure. He dies, and his wallet falls out of his kilt. Ren notices how dirty it is, and cleans it with a rag. As he rubs the wallet, it dramatically bursts open, and a genie comes out, calling itself “The Dead Space Scot Genie”, and grants them 3 wishes. He also gives them a one day only deal: “Get 3 wishes, get 3 free”. Ren says he wants beautiful women to bring him all the money in the world, and when the genie snaps his fingers, Ren is surrounded with gold coins and 3 alien women. He says he is happy for the first time ever and wonders what more he could need. Stimpy begs Ren for him to have a wish, so Ren lets him have one.

Stimpy wishes that no one will ever have need for material possessions ever again, and with that, Ren’s money and the spaceship disappear. Ren and Stimpy are without their helmets. Stimpy then wishes for equality for everyone regardless of race or creed, and the 3 alien women turn into men of color (believed to be a vaquero, sheihk and south Asian guru). Because of the lack of oxygen, Stimpy is beginning to rupture, but he manages to make a final wish: to be where it’s always sunny and no one ever grows old. They all begin to float toward the sun (the genie’s way of granting Stimpy’s wish), and Stimpy begins to praise out loud, saying, “And lo, on the third day he did wear of a ghost, and it was good. Where not be hath of unleaven bread, for it is diseased.” As the two float towards the sun, they begin to be burned alive, with Stimpy still praising and Ren being disgruntled his arms are burnt off so he cannot smack Stimpy. The episode ends with the two being completely burned, and Haggis’ dentures saying, “What are ya?”