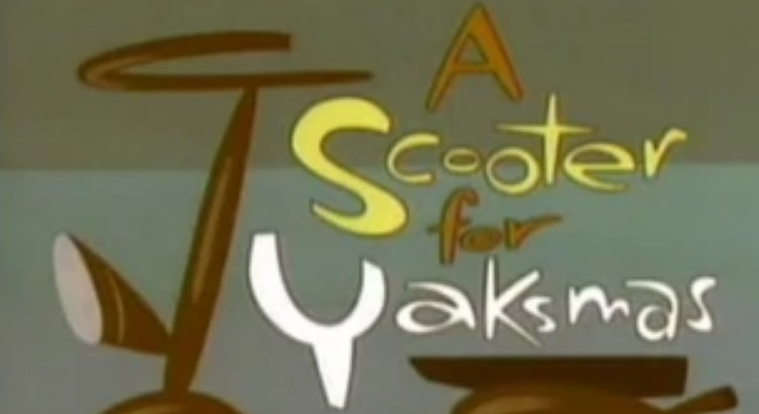 “A Scooter For Yaksmas” is the nineteenth episode of Season 5 of The Ren & Stimpy Show, which aired on December 16, 1995. It is the final episode of the Nickelodeon run, marked as the official series finale.

It is Yaksmas season, spoofing Christmas, and Stimpy is eager to have his own scooter for the holiday.

The episode begins with Stimpy getting paid in fudge pop sticks (with a half-stick Yaksmas bonus). He returns home and tries to convince Ren to buy him a scooter for Yaksman with not-too-subtle hints. Then he begins decorating the house for Yaksmas, despite Ren’s insistence that Stinky Whizzleteats doesn’t exist. The next morning, the two exchange gifts. Stimpy gives Ren a jewel-encrusted statue of the Queen of England (because Ren sent him a threatening note that said “Buy me Queen or Die”). Ren, however, only gives Stimpy a box of fudge pop sticks (even though he has hundreds of boxes of them already). Triggered and heartbroken, Stimpy leaves the house to go look at the scooter he wanted. He accidentally breaks the store’s window glass by pounding his fists against it and the scooter falls off its display and into his arms. An old woman witnesses this and mistakes Stimpy for being a thief. On the run from the law, Stimpy decides that only one person can save him: Stinky Whizzleteats. He goes to see Stinky at the West Pole Motel and discovers that Ren bought him the scooter after all, but Stinky didn’t deliver it. Stimpy leaves the mangled scooter at Stinky’s apartment and takes the brand-new one Ren bought him. Soon after, the police burst into the apartment and Stinky is accused of stealing the scooter that Stimpy left.

It’s a Whizzleteats kind of season, it’s a special holiday

The night air smells of sausage and rancid curds and whey

The pickled chicken livers are all laid out with care

He comes a hurlin' in his souped-up sausage cart

And we tumble down the staircase, landing on our heads

Good ol' Stinky Whizzleteats, he always leaves us some

He comes a hurlin' on his souped-up sausage cart

It’s a Whizzleteats kind of morning, and we jump out of our beds

And we tumble down the staircase, landing on our heads

Good ol' Stinky Whizzleteats, he always leaves us some

There goes ol' Stinky now, on his hot-rod knockwurst sled