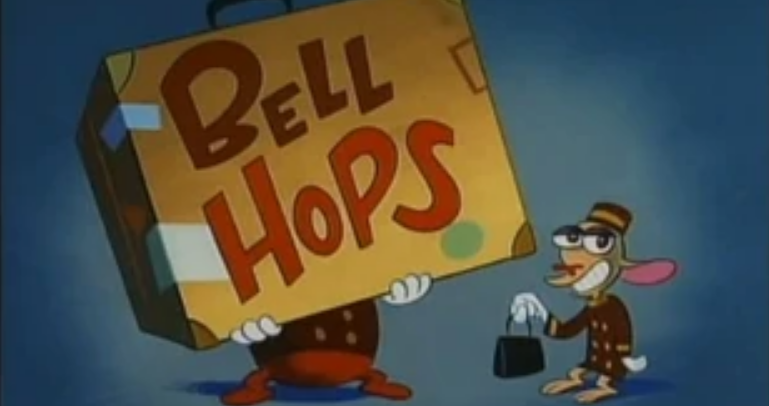 Ren and Stimpy show up to the front counter of a hotel in bell hop uniforms when they are informed by the manager that Mr. Noggin in the penthouse is not to be disturbed and none of the newspaper reporters should be able to take any pictures of him. The boys then proceed to take an incredibly overweight woman to the top floor and then are called back down, the manger then gives them a box and says to take it to Mr. Noggin and to resist the urge to open the “awe-inspiring” box. On the elevator ride up to Mr. Noggin’s room Ren opens the box and finds it contains a hat, they get up to Mr. Noggin’s room, knock on the door, and when Mr. Noggin answers he opens a small slot on the door so only his eyes can be seen and then takes the box. After preparing a room, Stimpy takes out the trash, but when he gets to the trash can a man pops out of a garbage can and says he’ll give Stimpy five bucks for a picture of “The mysterious man in the penthouse” (obviously referring to Mr. Noggin) Stimpy mumbles and the man says “Ok a million dollars, but that’s as high as I go.” Stimpy says no and pours garbage on the mans head. After oiling up the obese woman from earlier Ren goes to take out the trash. The same man appears for Ren and offers him five bucks for the picture, Ren accepts the offer and takes a small camera from the man. Ren goes into the room and sees that Mr. Noggin is only a head, but Stimpy foils his efforts to capture a picture of him. In an effort to save Mr. Noggin Stimpy jumps out the window, to which the obese woman catches Mr. Noggin. The obese woman and Mr. Noggin immediately fall in love and get married. For finding him the love of his life Mr. Noggin gives Ren 1 million dollars, but the hotel manager takes it and makes Ren cry.