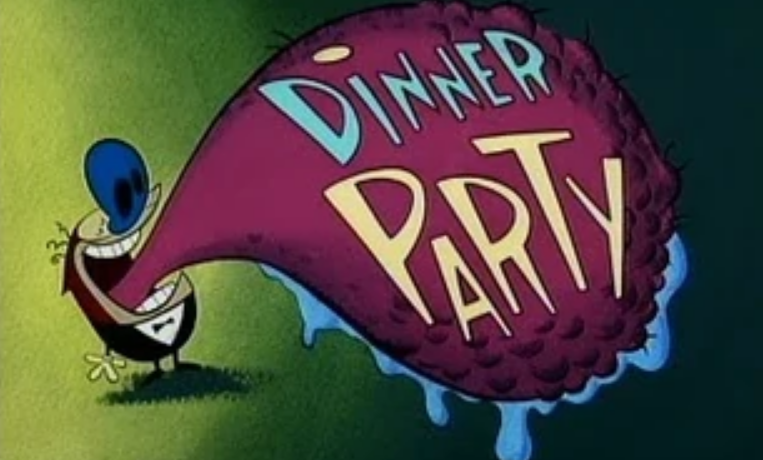 “Dinner Party” is the fourteenth episode of Season 5 of The Ren & Stimpy Show, which aired on November 11, 1995.

Ren narrates the proper etiquette for throwing a dinner party.

Ren introduces himself to the viewer, living in a large mansion and dressed sophisticatedly as he claims to be a master of etiquette. He says to the viewers at that he and Stimpy are going to be hosting a dinner party, and says that the first thing to do is get someone else to do all the efforts of preparing, which he appears to believe is below him, so he makes Stimpy do it. Explaining the importance of sending invitations to a party, Stimpy is assigned the task (only to mail the stamps inside the letters and eat the actual invitations). Ren describes how we should chose to invite friends of higher class in society, as Stimpy delivers the invites to their “classiest” pals, as the montage begins of Stimpy bringing invitations to Mr. Horse (revealed to be living in a small, damaged apartment in a crime ridden ghetto), Muddy Mudskipper (who is serving a prison sentence and making license plates for cars) and The Baboon (who is shown to be a street gambler). Stimpy returns home the night of the party and prepares soup, taste testing it by drinking it out of the pot and spitting it back in. Later that evening, the first of their guests arrive, creating a long traffic line in their vehicles in the driveway. Mr Horse arrives in a fancy car. Muddy in a large cruise ship he drives on land, and Haggis McHaggis in a helicopter (which Stimpy wrecks when he does the liberty of parking it for him). Ren carries a mirror to check his appearance, and pops a huge blemish with an ingrown hair with pliers, covering the bloody scab with toilet paper. Stimpy answers the door and it’s Sammy Mantis. Instead of giving Stimpy his coat to hang, he sheds his exoskeleton, which Stimpy hangs alongside other “skins” (a fish skin, human skin and bear skin).

To Ren’s suggestion, Stimpy formally announces the guests to the party. “Professor Fly” and his escort, “Ms. Rancid Meat” (which has been rotting since 1983), “General Lummox” (who resembles Kowalski or Ren’s Nephew), “Ambassador Salesman” (Hey, It’s That Guy), “Sir Duke of Chicken” (From Egg Yolkeo and Chicken in a Drawer), “Prince Mudskipper” and his lovely wife, “Gorgo” (a gorilla). Ren believes that handshakes are best given stinky and sweaty, so he achieves this by sticking his hands in the sweaty armpits of a Turkish weightlifter who is in their living room pumping iron. Haggis, introduced as “Sir Scotsman of Spain”, complements Ren on his “masculine” handshake. Once everyone has arrived, including The Shaven Yak and Powdered Toast Man, they are seated as the soup that Stimpy cooked earlier is served (Stimpy wears a hazmat suit and serves the soup through a tank and pressure hose, spewing it all over everybody, scalding them). Ren prepares to say grace, in a scene parodying “The Last Supper”, as all their friends pose in a similar way, asking God to " not let then swim 30 minutes after eating" and to “bless their intestines”, after which everyone digs into the chow sloppily. Ren reminds us that to break the ice, we must be sociable and polite to our houseguests, complimenting “Emperor Baboon” on his “inflamed butt”, flattering him. Stimpy presents the main course, “honey glazed sheep livers with dusty wig stuffing”, to which Mr. Horse and The Shaven Yak indulge upon. Haggis seems to prefer eating his with chutney (because he’s Scottish). Everyone burps loudly, and rather than find it disgusting, Ren takes it in pleasure, thinking that it shows everyone appreciates the food. However, Powdered Toast Man disagrees, holding in his own belching out of polite etiquette. Ren tries to convince him to cut loose and here they consider it “formal”, but Powdered Toast Man chooses to hold in his burp, eventually the built-up pressure causes his head to pop off his shoulders and lands on The Baboon’s plate (who proceeds to viciously shred and devour his decapitated head graphically off screen). Ren casually pitied him for not just burping to begin with. Stimpy, dressed in a raincoat, brings out a garden hose to spray the guests down “to cleanse their palettes”.

After dinner, Ren allows the male guests to adjourn the the bathroom to partake in a “Scandinavian tradition” of going to the bathroom for “cigars and parlor games” (puking their guts out) who are led by a Roman. The women (including a female Shaven Yak) go to the tea parlor to have their “shins shined and bunions schalacked " by Stimpy using a paintbrush. Hours pass, and Ren says that we have to give “subtle” hints to the guests to give them the message the party is coming to a close. (Screaming at Baboon and taking his food away, dragging the Yak from the bathroom). As Stimpy rolls Haggis to the door like a log, the knob turns as everyone panics, since no one else was invited. The door opens to reveal the Pipes, who are revealed to be the true homeowners of the mansion that Ren and Stimpy have treated as their own home to throw their party in without the Pipes' permission or knowledge. A furious Mr. Pipe confronts everyone and tells them to get out of his house, as all Ren and Stimpy’s guests leave in a terrified hurry. Before they can escape, the Pipe’s take Ren and Stimpy into their car with them. Stimpy (now acting as their frightened chauffeur) begins to drive them and Ren down the road fast and erratically through the neighborhood. Ren says, sitting with Mr. and Mrs. Pipe, that the best excuse for when you have lingering party guests in a house that doesn’t belong to you, is to just reveal the truth… and also be sure to pay off your “accomplices” as he pulls out a fat wad of cash, revealing Ren and Stimpy did get permission to use the Pipes' mansion for the party and just didn’t tell the guests, and paid the Pipes' extra to arrive unannounced so the guests can leave. Mr. Pipe snatches the money from Ren, telling him to “Shut up and pay up, boy!” As they all laugh, driving into the morning sunrise.