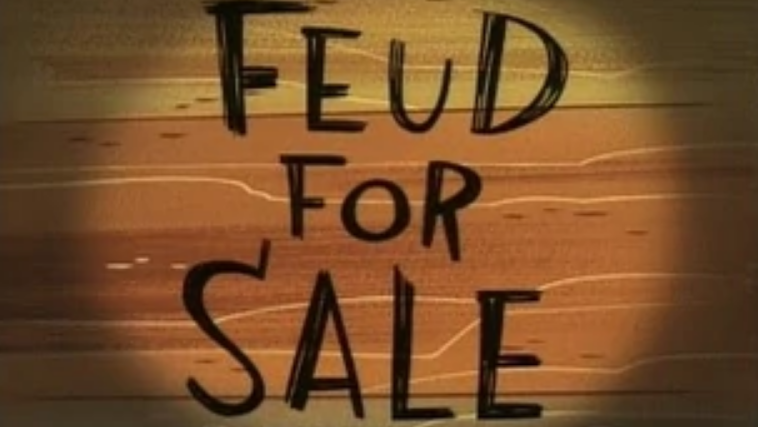 The Announcer Salesman plays a salesman who outwits Abner Dimwit and Ewalt Nitwit, the morons from Out West and Farm Hands.

The Announcer Salesman from “To Salve and Salve Not” has just scammed an entire town of people who chased him out of town in a mob. He travels through the desert on a tiny motor scooter he dwarfs, as he celebrates his short lived victory, though tarred, feathered, targeted and shot with arrows. Karma soon catches up with him as his tire pops and he skids all over the road and nearly runs off a cliff. He regains his composure quickly, using the cliff as a way to seek out new victims by using a complicated, old fashioned telescope or opera glass like monocle. The first thing he sees is the homes of Abner and Ewalt from “Out West” whom he notices their neighboring property lines are marked with lines and a sign saying “Entering: Feud Zone” as bombs, craters, and weapons litter the damaged land as the two hillbilly cowboys stare at each other coldly as they are sharpening sticks with a hammer handle and a chicken drumstick respectively. Describing them as “homo stupidicus” and “moronicus inbredicus”, The Salesman sees the feud as a perfect opportunity to scam the two, after feigning compassion for their situation and vowing “to save them from themselves”

First, the cleaned up Salesman introduces himself to Abner, who can’t remember his own name without checking his underwear and is constantly spaced out. The Salesman compliments his stick, and Abner explains how he is whittling it to attack Ewalt, who is feuding with Ewalt. He angrily denies their friendship to Salesman. Mildly annoyed by his stupidity, and not afraid to show it through sarcastic remarks, the Salesman offers Abner an upgrade to his regular stick… a “pointy” stick, which the Salesman describes as modern and sophisticated. An excited Abner jumps on the offer, but the Salesman tells him that he will not give him the stick without “monetary compensation” which Abner says he has none of, although he has tons of money. The Salesman plays off his stupidity, pretending to drive a hard bargain, but tells him “since he’s the kind of lowlife scum he likes” he’ll take his money.

The Salesman watches Abner open a lock on a safe, actually, the bedroom door of his grandfather, who is revealed to be a melancholy, cranky old man, laying on a smoldering mattress locked away in his filthy bedroom with garbage. Abner tells him that he just wants to borrow a million bucks from him as he is already helping himself to the money stuffed into his mattress. Grandpa Dimwit tells his grandson through coughs in a gruff, raspy, angry voice he just wants to be left alone to “burn up in peace.” Having sold him dozens of useless sticks, Salesman tells Mister “Dip-Wit” that “he’ll be the envy of all his friends”. Happily thanking him, Abner goes to “try them out” as the Salesman laughs and calls him a loser.

Later, Salesman has turned his focus to Ewalt, having disguised himself as a rocking chair. He reveals himself to offer Ewalt a pair of binoculars so he can see Abner who has revealed to be wearing the sticks as a hat and loin cloth now as opposed to using them as weapons. Taking advantage of Abner’s ignorance, he convinces Ewalt that the sticks are indeed clothes and in order to look well dressed himself and not be outdone by his neighbor turned enemy, he offers him “genuine CobbCo” (referencing Wilbur Cobb) used flypaper for $36,000, winning him over when he mentions that it is popular in France among men. Ewalt goes to his own grandfather (who is so gigantic his foot alone takes up the entire living room) for cash, who scolds him for digging into and spending his retirement money he’s been saving. Ewalt tells him that he will probably be dead by then.

After selling the flypaper to Ewalt, the Salesman re-approaches Abner, by hiding in a dirty, nasty toilet on his property, and shows him that Ewalt is now wearing flypaper in the same manner and must be trying to outdo him. He then sells mousetraps to “Abwalt” to attach to his skin by activating them, covering his groin with them, causing him excruciating pain. Returning to Ewalt by sitting on his head, he shows him Abner, and how happy he looks in so much pain. He convinces Ewalt to purchase a “beehive girdle” to wear around his torso, getting constantly stung by bees. The Salesman resorts to using a shovel to shove the dough he has conned the two hicks out of into his full to bursting coat. Abner notices Ewalt in the beehive, and without influence, he throws a moonshine bottle at him in anger, knocking him over. The Salesman tells Ewalt that in order to not be an ugly loser he needs to stand up for himself (and his “fashion statements”) and this means war. He summons a “CobbCo Elephant Tosser” already loaded with an elephant. Gleeful, Ewalt runs for even more money, blazing a trail of fire as he pulls the stake out of the ground, launching the pachyderm at Abner and his home. In a few mere seconds, the Salesman already has sold Abner a “CobbCo Elephant Catcher” (a baseball glove on a handle) as it begins to vaguely parody a Roadrunner Cartoon as Abner tries to catch the elephant, succeeding, but managing to get hit by the elephant’s butt anyway and knocked out of his shoes, crashing through his home, having been destroyed despite his efforts. The Salesman counts his ill gotten money happily until the elephant approaches him and demands to his portion of the cash (he made a commission deal with him in agreement to be launched) to the Salesman’s chagrin and displeasure. Paid off, the elephant turns around and reveals Abner wedged face first deep between his butt cheeks as he proceeds to forcefully flex his butt muscles and fart him out with all his might onto the ground before he departs.

A beaten and bruised Abner stumbles to his feet as the Salesman puts on an innocent face. Abner grows tired and fed up and says he had enough. In a rare moment of intelligence and assertiveness, he decides to call out the Salesman, telling him that his products and his fanning the flames of the feud are a “hoax” and that he was “trying to take advantage off’a him”. An angry Abner tells Salesman that he quits and heads for home. The Salesman, in a manipulation attempt, says he knew all along he, Abner Dimwit, was a loser and it would just be a waste of his time to help him. He begins to drop Ewalt Nitwit’s name, mentioning that he was always the better neighbor which is what Abner would never be… without Salesman’s help, that is. Pitting him against his neighbor and agitating Abner’s hard feelings, the Salesman goes on with more sophisticated insults (disguised as complements, as Salesman knew Abner was too dumb to know the difference based on their interactions) which make Abner feel inadequate and inferior, unable to do it without the Salesman. Salesman keeps getting more ruthless describing the “kindly”…. “repugnant”, “redundant” Mister Nitwit to the point his voice becomes distorted and demonic as his expressions. Abner breaks down, getting on his hands and knees begging for the Salesman to “make him all those fancy words too!” as he offers a ton of money.

We cut to a runway, where the Salesman is piloting an airplane and has Abner above a hatch while holding an atomic bomb and wearing a Japanese war bandana. Abner asks the Salesman if he knows what he’s doing and if this is safe, to which “Mr. Salesman” reassures him, stuffed like a turkey with dollar bills. They take off and soon the Salesman scopes out “the Nitwit house” before pulling the rope to drop Abner and the bomb over the house, exclaiming “hillbilly away!” as Abner drop hundreds of miles, landing directly on a petrified Ewalt. The Salesman smiles with a satisfied grin as he watches the atom bomb detonate, creating a massive mushroom cloud and nuking the entire area for miles and leaving no trace of anything but a massive, smoldering crater. As both men’s flesh burn, Ewalt asks Abner if he’s thinking what he’s thinking, and Abner says that they have been fools. They realized they spent all their money and all their property is destroyed, and that the Salesman really was just a con artist and bully. Ruined and without absolutely anything, the two decide that since there’s nothing to jealously fight over then they no longer have a reason to feud, making up and forgiving each other, restoring their friendship

The Salesman watches from the cliff from before, turning to the camera and “admitting” that this is why he doesn’t just rip people off for their money, but to bring peace and joy to them, using a rekindled Abner and Ewalt… within their barren, dead, atomic crater as an example. He proudly walks to his shiny new car (which he presumably already purchased with some of the cash) overflowing with all the money he “made” as he says he is off to “greener” pastures. He drives off into the sunset, with Abner’s Grandpa (who survived the atomic blast) laying on his mattress atop Salesman’s large sacks of money, as he takes him along with him on the next adventure in swindling innocent people as the episode ends.