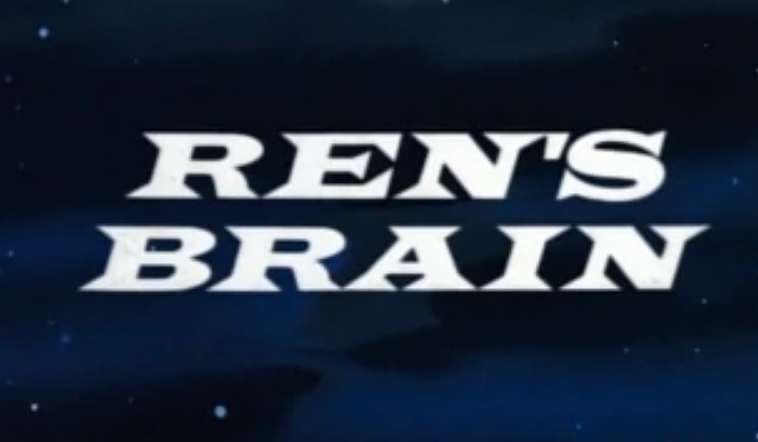 Stimpy re-enters the world of science as a “freelance brain surgeon”. He soon runs out of good brains on which to conduct experiments and removes Ren’s brain. The brain, not knowing he’s out of Ren’s body, goes on with his life until he notices Stimpy with a new dog: him.

At the beginning of the episode, Stimpy is seen inside of a laboratory, conducting electrical experiments on brains. He is performing one on a brain, but the experiment fails and the brain does not survive. Stimpy wonders where he could find a more suitable brain, and miserably goes to bed.

That night, while Ren is sleeping, Stimpy believes that Ren’s Brain is a viable subject. Thus, he grabs the sleeping Chihuahua and takes him into the operating chamber of his lab, where he surgically cuts open Ren’s head and removes his brain. He then sticks it into a tank full of Bio-Fluid to preserve it, and then goes to bed, to perform experiments on it tomorrow morning.

The next morning, Ren’s Brain awakens. Using some of the exposed spinal cords as limbs, he crawls out of the tank, unaware that he is now a disembodied brain. He dresses up and heads off to work as normal.

When Stimpy goes into his lab to Ren’s Brain to do experiments on it he finds that it’s gone. He starts to panic, worried that Ren might kill him if he were to wake up and find that his brain is missing, so he uses a telephone to replace his brain.

Stimpy sees Ren’s body, now in a zombified mindless state. He takes advantage of this and uses the mindless Ren as a playmate, and goes to do things with him that he normally could not do as Ren would normally refuse, while the zombified Ren body just fumbles about and makes odd noises.

Ren, still as a brain, returns home from work, to find Stimpy hanging out and playing with his brainless body. Still unaware of the state he is in, Ren mistakes his body to be a new roommate that he has replaced him with, and feels betrayed, asking how Stimpy could do such a thing. Stimpy tries to explain to him that it is not what it looks like, but Ren’s Brain does not listen and starts beating him up, while the brain dead Ren body just walks about aimlessly. Stimpy reaches for his “Emergency Brain Tranquilizer,” and struggles to use it on Ren’s Brain, who starts strangling and clobbering him mercilessly.

The tranquilizer needle is shown edging nearer and nearer to a brain on a TV. The family watching the TV reacts in horror. The tops of their heads explode, followed by everyone’s houses in the city exploding, then North America. And then, the entire world explodes. The episode ends with the narrator saying “And thus ended the Republican Party as we know it,” while Ren’s Brain goes flying through outer space, yelling “YOU EEDIOTS!”