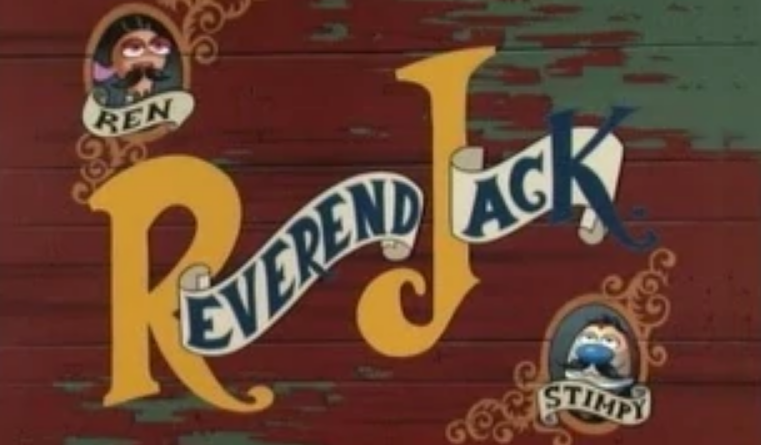 “Reverend Jack” is the eighteenth episode of Season 5 of The Ren & Stimpy Show, which aired on December 9, 1995.

Ren and Stimpy have new jobs, this time, they’re meat truck drivers. What they like most about their job is that they get to work for the Reverend Jack Cheese, a genius who preaches the gospel of meat through his puppet shows. Once enough kids have assembled around the truck, it stops and converts into a stage where Reverend Jack (with Ren and Stimpy controlling puppets) tells about how man and his meat used to live in harmony before meat turned on man, which causes an offended cow to throw rocks at the stage. After the show, Ren and Stimpy invite the kids to enjoy delicious meat treats.

Later that night, after Ren and Stimpy count the money the kids gave them, Reverend Jack orders them to tend to him in preparation of a ceremony. After their work is done, the Reverend holds a ceremony paying homage to meat, with Ren and Stimpy as his congregation. The next morning, Jack wakes up and tells Ren and Stimpy of a vision he had of his father saying it’s time for him to learn to drive. Jack then takes the whell of the truck and speeds down the road past children who wanted to buy some meat. When Stimpy points out that they drove right past some kids, Jack tells the boys to “keep driving and don’t stop.”

Months later, Ren and Stimpy are still driving the now-battered truck, and Ren, depressed that they haven’t put on a single show in so long, tells Stimpy to go in the back and see what Jack is doing. Stimpy finds Jack lying down in a disturbed stupor and Jack invites him into his “office” and tells him to play a record. The record appears to drive Jack to tears and Stimpy, having had enough, tearfully tells Jack that they should put on another show because “the children need their meat puppets.” Jack then snaps and yells at Stimpy that it’s not about the children, but the meat. Just then, Ren sees a police car outside and stops it. Him and Stimpy hop out, and the officer looks into the back of the truck to see that Jack has gone completely insane, half-naked and muttering gibberish. The officer demands that Jack hand over his meat confectioner’s licence, but he escapes by riding on a cow carcass, saying that they’ll beg for him to come back. Four years later, Ren and Stimpy are now running the puppet show themselves, but now they have to face rocks thrown by their latest critic, Reverend Jack.