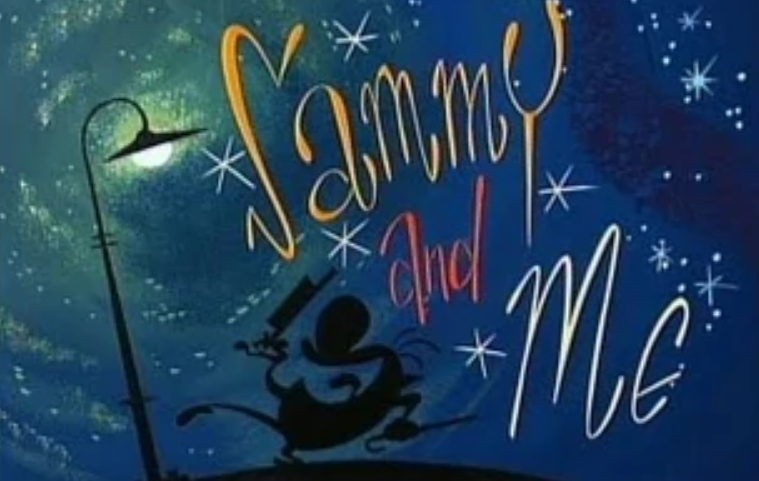 “Sammy and Me” is the twentieth episode in Season 5 of The Ren & Stimpy Show, and aired on October 20, 1996. It did not originally premiere on Nickelodeon, but rather MTV.

Stimpy has been waiting in his mailbox for a package to arrive. After the dimwitted mailman delivers it (punching Stimpy with it to make it fit with Stimpy inside the box) Stimpy takes his sought after package to his secret treehouse to be in private. Laughing maniacally, Stimpy opens it to reveal it as the “Sammy Mantis Jr.” (Sammy Davis Jr.) Kit, who is an anthropomorphic mantis and a famous performer in the universe of Ren and Stimpy. Featuring all of his favorite insect celebrities' accessories, it includes “cool threads” and “Sammy’s Insect Eye” (parodying the glass eye of Sammy Davis, which Stimpy must screw into his eye socket like a light bulb)

Later that night, Ren is relaxing in his chair with a book, when Stimpy comes in dressed in the clothes and gear of his Sammy Mantis Kit and smoking a cigarette. He asks Ren, excitedly if he can identify who he is. Ren, who doesn’t know or care, guesses wrong to Stimpy’s impressions, trying to guess incorrectly he is other celebrities like “Wally Cox” or “Merv Tormell”. Stimpy decides to convince Ren by singing Sammy Mantis' hit song “The Mantid Man Can”, a parody of Sammy Davis Jr.’s “The Candy Man Can”, with disturbing lyrics about the lives of praying mantises (biting off heads of their prey, along with their parents and offspring) as a shocked Ren soon cannot help but sing along to gleefully. However, Ren does not guess correctly, forcing Stimpy to “bite his head off” to which he finally says Stimpy is Sammy Mantis. Angry and annoyed, Ren sends Stimpy to bed.

That night, as they go to sleep, Stimpy asks to read him a bedtime story titled “Sammy Kazootie” (a parody of a Little Golden Book) Ren just wants to get it over with, and once he sees what Stimpy wants him to read, he says no. But Stimpy reminds him he promised. Ren, praying for strength from God, pretends to read the story (about Sammy as a prince biting an evil snow queens head off) before chucking it into their fireplace, to Stimpy’s disappointment. The next morning, Ren wakes up to find Stimpy gone. He has left Ren a note, saying he is off “to go find Sammy” apologizing about last night. Ren throws the note, pillow and all, into the fire and goes back to sleep. Stimpy stands in a long line of a record company called “Power Records” which is having a book signing featuring Sammy. When Sammy pulls up and gets out of his car, the huge crowd flocks to him and overwhelms him with paparazzi and admiration, even climbing on his car, causing him to leave. Stimpy sneaks onto his car, following him home, where he proceeds to steal a trash can of his and take it home. That night, it’s revealed that this is just one thing he has stolen from Sammy. It’s shown that Stimpy has soon become obsessed with Sammy, collecting other items of his that he can treasure in the style of fanhood taken to the extreme. Filling and hoarding his room with everything from a tire off Sammy’s car, to garbage he threw away, to his thorax (butt), Stimpy builds a shrine with candles to Sammy, nearly worshiping him.

He decides to go hunt for more of these “trophies” by sneaking onto Sammy’s property. Stimpy notices Sammy is having a party this evening with other insect celebrities attending such as “Dean Mayfly” (Dean Martin), “Peter Locust” (Peter Lorre), “Jerry Beetle” (Jerry Lewis) and “Liberoache” (Liberace, who Stimpy seems to hold in as high regard as Sammy). Stimpy is starstruck when he finally sees Sammy, who Liberoache invites to do a “duet” with him. As Sammy sings “The Mantid Man” and Liberoache plays the piano, Stimpy woos and swoons like a fan girl, fainting, though, missing the once in a lifetime performance, breaking his heart when he comes to. After, Liberoache asks Sammy for the honor and privilege of “biting his head off”, to which Sammy reluctantly agrees under peer pressure. Stimpy looks on as Sammy savagely and graphically eats Liberoache’s (who is elated between agonizing screams) head, with his eyeballs and chunks of his brain and skull flying all over, finally swallowing the rest of his head whole. Stimpy, saddened that he missed Sammy’s performance, and will never get the blessing of Sammy gnawing his head off, heads home in disappointment. However, Sammy noticed him on his land and went to confront him. Sammy approaches Stimpy, recognizing him from his failed book signing. Stimpy professes his admiration of Sammy, claiming to “have all his exoskeletons”. Angry, Sammy accuses Stimpy of trespassing and theft, to which Stimpy begins to cry hysterically, apologizing to Sammy and telling him all he wanted to do was meet his hero. Sammy has a change of heart, pitying Stimpy, and offers to bite his head off, to which a relieved Stimpy believes he is not worthy of such a esteemed treatment. Sammy, however, scoops him up into his arms as the two sing “The Mantid Man Can”, and soon Sammy begins to eat Stimpy’s head, as the feline screams the rest of the song in painful agony.

Later that night, Stimpy returns home to a neutral Ren, who wishes him good night. The camera pans to Stimpy (with his entire scalp, forehead and much of his face gone except for one eye and his mouth and his brain exposed) almost intelligibly (possibly with brain damage) slurs “Good night, Ren” to the best of his ability.