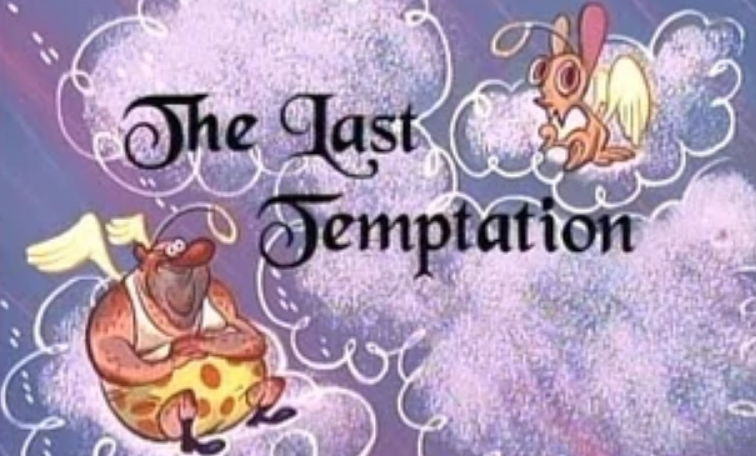 “The Last Tempation” is the twenty-first and final episode of the fifth season of The Ren & Stimpy Show, and aired on October 20, 1996. It never aired on Nickelodeon (until 2018; 22 years later on the night time block NickSplat), but rather MTV.

One morning, Ren is getting impatient waiting for his oatmeal. When it arrives, the oatmeal is just a big ball. Ren eats it all in one bite, but it gets stuck in his throat and he starts to choke. He cries for Stimpy’s help, but Stimpy can’t hear him. Ren’s face starts to turn blue. He then has a flashback about he and Stimpy’s friendship. After the flashback, Ren’s soul drifts out of his body and up to Heaven. When he arrives, Wilbur Cobb teaches Ren not to be mean to Stimpy. Later on, Ren’s soul floats down to Earth and back in his body. Ren then starts being nice to Stimpy. Ren then cremates his most prized possessions. Ren then tells Stimpy he’s been stealing out of his piggy bank and gives Stimpy $1,000,000. While Stimpy is rich Ren starts to get jealous. Later on at dinner, Stimpy swallows an entire ham, but it gets stuck in his throat and now he starts to choke. Cobb then tells Ren to save his buddy. Ren goes to get help and then saves Stimpy. Wilbur Cobb is proud of Ren, but takes off with Stimpy’s stuff and the two start to cry like babies, thus ending the series.