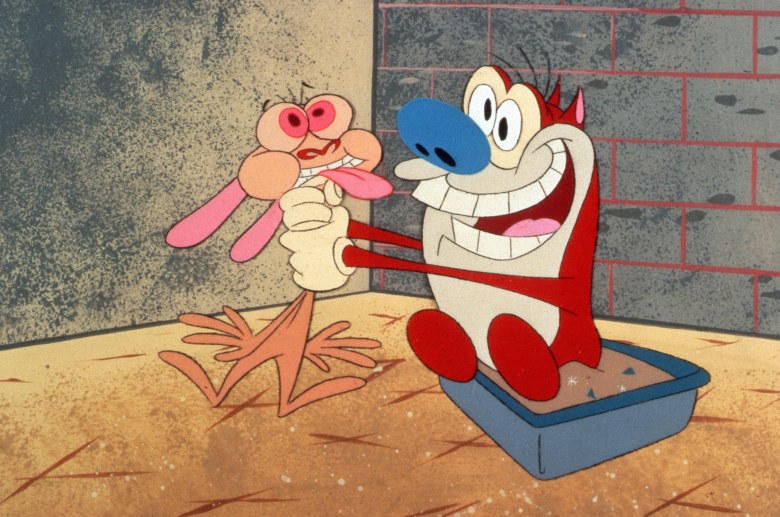 Stimpson “Stimpy” J. Cat is a 3-year old (28 in cat years) fat, dim-witted, and rotund red and white Manx cat with a brain that’s literally the size of a peanut. He has a big, blue nose, dark blue eyes which can only be seen in close ups, flat feet, no tail, human-style buttocks, and a pair of white gloves. He invents dangerous machines and can cook. His favorite song is “Happy Happy Joy Joy”.

He often has his tongue sticking out and usually says “Oh, Joy”. He likes to watch cartoons, most notably “The Muddy Mudskipper Show” and use Gritty Kitty Litter. Stimpy’s good-natured personality is the opposite of Ren’s personality. He is voiced by Billy West in The Ren & Stimpy Show. In the spin-off series Adult Party Cartoon, Stimpy was voiced by Eric Bauza (who had worked on the series along with the originals). 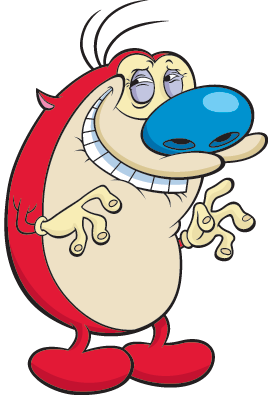 Small obese red and white manx cat, pink floppy tongue, big, blue nose, purple eyelids, blue collar with a name tag, flat feet with either three toes, four toes, or no toes, human-like buttocks, and a pair of white gloves with fingernails. His main fur all around him is red and his muzzle and belly is white, he also has a cream colored mask pattern round his eye area, three strands of hair on his head

Stimpy from the original series.

Unlike the psychotic and short-tempered Ren, Stimpy’s most famous personality traits are his good nature, happy-go-lucky nature and his positivity. Stimpy is very optimistic whenever him and Ren get in bad situations. Stimpy has a childlike personality, a trait that is shown in his love of cartoons, with his favorite being Muddy Mudskipper. He also states that his favorite ‘live-action drama’ is “Commander Hoek and Cadet Stimpy” owning many of the show’s merchandise.

He also can’t spell very well in most episodes and can barely spell his own name, and can’t count on his own because of his stupidity. According to Ren in “Ren Needs Help!” Stimpy is either illiterate or can barely read, as when he was writing a letter to Stimpy, he called him a moron and wished he could read, although it is unknown if Ren actually meant it in truth or an insult. In the episodes, Robin Höek and The Littlest Giant he is shown to have trouble reading. As shown in “Stimpy’s Big Day” Stimpy can barely write legibly.

Stimpy being the typical “eediot”

He has a high tolerance to pain, as in many episodes when Ren smacks and beats Stimpy around he barely flinches, simply just drooling or standing around. In “The Big Shot” he turned his head to allow Ren to slap him and simply smiled and winked at the camera. In one episode Stimpy got tired of Ren’s bullying and started to “grow up”, which made Ren scared. InNurse Stimpy, when Ren became ill, Stimpy became a nurse (hence “Nurse Stimpy”) and took care of him for months while Ren recovered.

Stimpy shows to really care for Ren (despite the abuse he puts him through) and can seem really emotional. He also seeks Ren’s approval and respect, as in Rubber Nipple Salesmen he dreamed that he could be as great a salesman as Ren. He is also shown to call Ren ‘buddy’ while Ren calls him ‘old pal’, ‘man’, ‘pal’, or ‘old friend.’ ‘He has a good heart and sweet nature and is usually kind hearted. He tends to comfort Ren when he breaks down. In “Double Header” he told Ren that he loved him after he tried to send him away to Ursa Minor, while in “I Love Chicken” he refers to Ren as his best friend. In “Insomniac Ren” Stimpy had a dream in which he and Ren had a litter of children that resembled them, which included Stimpy breastfeeding the children and allowing one that resembled Ren to suckle his finger. In “Stimpy’s Fan Club” he stated that he found Ren to be his hero and wished he could be more like him. In Nurse Stimpy, he was shown to take care of Ren for months while Ren was sick with an illness, bringing him breakfast in bed and staying with him throughout the night. He also tried to make Ren better by a variety of methods, such as a ‘daily spleen flensing’ and a sponge bath. However, this made Stimpy sick in return by the episode’s end. In “Ren’s Retirement” he was shown to sorely miss Ren, wearing a mourning veil and black dress at his ‘funeral’ and insisting that he should be buried in the coffin with him.

Between the two, Stimpy cares for them by doing their housework, such as cleaning the house, ironing and cooking their meals. This is made especially apparent in “I Love Chicken” where it is mentioned that Stimpy cleans the apartment and irons the clothing when Ren is at work and that when he comes home, Stimpy gives him his slippers and his pipe, before going to make the pair dinner. In post-Spumco episodes, it is stated multiple times that Stimpy cooks for him and Ren, among them “My Shiny Friend”, “Ren’s Bitter Half”, and “I Love Chicken”. Indeed, in several episodes, he is shown taking on a motherly role or as the voice of reason, episodes such as “Son of Stimpy” in which Stimpy believes that his fart is a child named Stinky and he spends months outside waiting for him to return home or in “Ren’s Bitter Half” in which he attempted to tell Ren’s cloned halves, Evil Ren and Indifferent Ren, that they needed each other, as otherwise, they’d lose control and attempted to persuade Evil Ren out of replicating himself and creating an army. In “Fake Dad” he attempted to take on a maternal role to Kowalski to the point of wearing an apron, although Kowalski mostly ignored him. He also refused to allow Ren to scold Kowalski by spanking him, shaming him for it.

He is also highly adaptable to any situation or scenario. In In The Army he proves to be a more disciplined and competent cadet than Ren, which resulted in Stimpy being given less severe punishments than Ren, while in “The Great Outdoors” he easily adapted to camping, while Ren failed at every turn. In Space Madness it became his duty to make sure that Ren didn’t go mad from stress, but Ren ended up falsely believing that Stimpy was beginning to get space madness after he pinned Ren down during one of his episodes, and Stimpy ended up cracking at the episode’s end by pushing the History Eraser Button and erasing the pair from existence after Ren told him to guard it and having The Announcer Salesman egg him on.

Stimpy can also be very generous as seen in Ren’s Pecs, Ren had desperately been wanting pectoral muscles and after feeling like a “loser”, Stimpy remember that he had plenty of fat cells in his glutes that Ren could have. He also allowed Ren to leave him to be happy and become rich and famous in Hollywood, despite Stimpy’s sadness at their shattered friendship. He also gave Ren one of his own teeth at the end of Ren’s Toothache. In Sven Hoek he allowed Sven to use many of his things, such as his litter box and tried to cheer the pair up by playing “Don’t Whizz on the Electric Fence.” Stimpy is often times quite knowledgeable of certain things, as in the deleted scene of “Haunted House” he correctly told Ren that dimes in his ears meant that he’d been visited by the Bloody Head Fairy and in “Ren’s Toothache” he told him the story of the Nerve Ending Fairy. In “Supertitious Stimpy” he was shown to believe in superstitions and was able to save Ren - an Unlucky Beast - due to his knowledge, although the methods were questionable.

In several episodes, despite his stupidity, Stimpy is shown to have a genius intellect in the form of science and chemistry. In “Stimpy’s Invention” he made several successful inventions, such as the Cheese-O-Phone, Stay Put Socks, and the Happy Helmet, complete with a montage of him working in his lab. In “Ren’s Bitter Half” he successfully was able to work with genetic science, able to give himself three buttocks, and create the replicating formula, XB-49 that successfully made Indifferent Ren and Evil Ren.

In spite of his kind hearted nature, his idiocy has displayed some negative qualities as well. He can be impulsive, obnoxious, and shows to sometimes have disrespect for others, even when he doesn’t mean it. In My Shiny Friend he becomes increasingly addicted to his television as to completely isolate any care for Ren to the point where he asks him silently to sleep in a drawer. Ren kicks him out, naturally; it was one of the few examples of Ren’s abuse where Stimpy really deserved it. Stimpy also deceived Ren in said episode by making think he was cured twice and ended up overdosing on television, which forced Ren to make him live in the basement for a year in order to curb his addiction. At the end of the episode, he made Ren think that he was cured, only to turn his addiction from television to gambling. In Stimpy’s Invention he forcibly tried to make Ren happy by using the Happy Helmet, slowly turning Ren towards madness, as Ren was forced to do Stimpy’s chores and listen/dance to Happy Happy Joy Joy with him. Every time Ren stopped doing something or wanted to be left alone, Stimpy would assume that Ren wasn’t happy and forced him to be happy by using the remote control, which drove him further and further into madness. Most episodes have, however, shown him to have his usual good natured personality, even the later, post-John K. ones.

He’s also obsessed with personal hygiene, in particular, taking ridiculously good care of his teeth, as shown in “Ren’s Toothache” and “Ren’s Insomnia.”

In earlier episodes, he is shown to have a bad habit of throwing money away. In The Big Shot, he gave away the 47 million dollars he won in the “Gritty Kitty Litter” contest in to return to Ren, and in “The Boy Who Cried Rat”, he admits that he ate the five dollars he was given earlier by Mr. Pipe out of hunger.

Unlike Ren, he is shown to take more after his species. He is sometimes shown throwing up hairballs, which is referred to as hwarfing, most of the time on Ren, much to his dismay. Stimpy is also shown to own several cat toys, including a catnip mouse called Mousey and a litter box that he hails as his ‘first material possession.’ 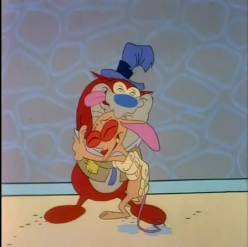 Ren is Stimpy’s best friend and roommate. Stimpy almost never gets mad at him, despite the abuse Ren often puts him through in almost every episode of the series, Stimpy still thinks of him as his best friend. Stimpy cooks all of Ren’s meals and cleans the house. Stimpy admits in a letter to Ren in Stimpy’s Fan Club that he considers Ren to be his favorite person, and that he respects him highly and wishes that he was more like him. 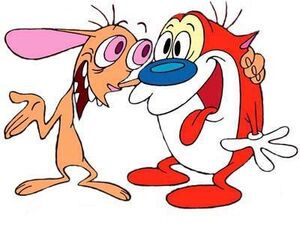