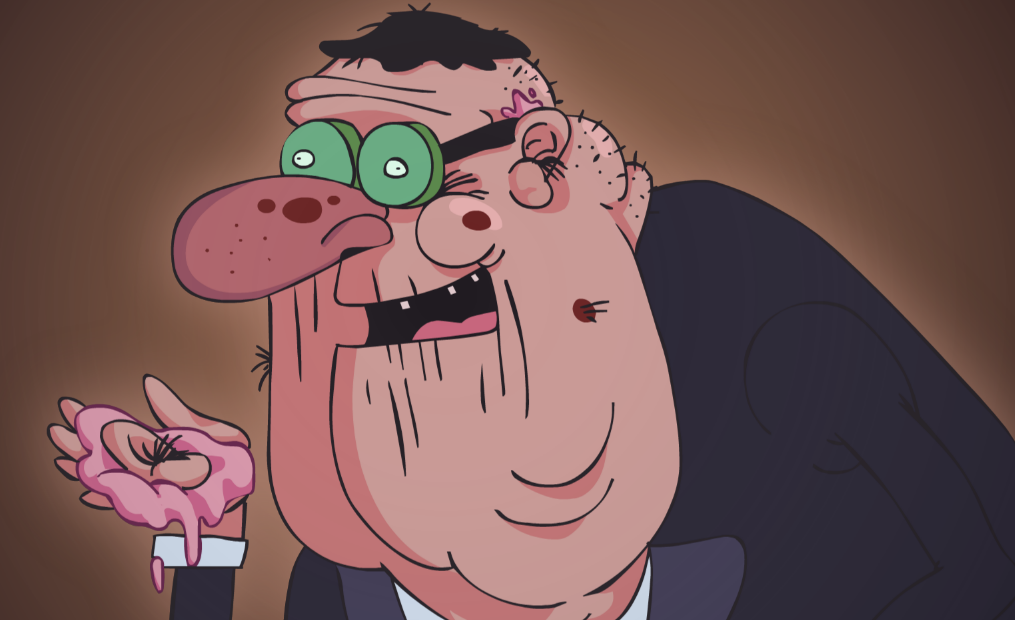 Wilbur Cobb is a demented, decaying, senile old man who is usually shown telling Ren and Stimpy wild stories. He first appears in “Stimpy’s Cartoon Show”, in which he is introduced as Stimpy’s idol, nicknamed “The Godfather of All Animation”. Wilbur Cobb would go on to reappear in later episodes, taking roles such as a museum worker, a reverend, and an escaped convict. 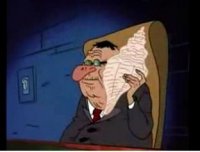 Stimpy is inspired by Wilbur Cobb to make a cartoon of his very own, I Like Pink. Ren and Stimpy later meet Cobb in person, where he is shown to be long past his prime. When Stimpy attempts to show him the cartoon, he instead rambles about multiple subjects including the cartoon industry. Just when Ren & Stimpy have had enough, Cobb reluctantly watches the cartoon. Once the cartoon is over, he applauds Stimpy for his effort, and promises that Stimpy will be where Cobb is one day - in jail.

Wilbur Cobb is an unexpected guest on the Bass Masters show following a jailbreak.

At Ren’s funeral, Wilbur Cobb gives a speech, but thinks it’s a marriage. When he’s told it is about death, a familiar subject according to him, he rejoices about outliving all his friends.

Wilbur Cobb appears in the Pipe family’s RV, where he works as a butcher. Later, Mr. Pipe tells a scary story about “The Phantom”, who kills people once he’s bored them to death with showbiz talk. Unfortunately, Ren & Stimpy get the eerily similar Wilbur Cobb as their roommate.

Wilbur Cobb is introduced in the Field Guide segment as “The Bandy Legged Codger”. Here, he is shown to endlessly complain about the government.

Wilbur Cobb is cast as a museum tour guide that spreads false info about the dinosaurs.

While not explicitly named here, Wilbur Cobb appears as a higher-up that grants other pixies their wings.

A photo autographed by Wilbur Cobb depicting him in bed with Ren & Stimpy, referencing Road Apples, is one of the many items Ren has on display.

Wilbur Cobb tells Ren & Stimpy a campfire story about the Galoots. He guarantees his story is nothing but the truth, promising to drop dead if otherwise. However, he faints right after, hinting none of the story was true.

Ren’s guardian angel is none other than Wilbur Cobb, first appearing in purgatory. After teaching Ren some morals and values, Ren escapes a near-death experience. Cobb soon returns in order to convince Ren to save a choking Stimpy, which he reluctantly does, but at the cost of Cobb making off with all of their possessions.